I assume that there was a single person who at a specific day in time was the very first to see and understand perfectly clearly that temperature is somehow identical with the mean kinetic energy of a bunch of molecules or atoms, and who was able to write this done as a mathematical equation.

Even though this precise idea grew and shaped slowly starting from some rather vague ideas and over generations of physicists (and inside the mind of this one physicist) I believe it became clear to him somehow suddenly (maybe but not necessarily accompanied by an eureka experience).

Do we know who this person was, and when it happened (roughly)?

Or do you believe this kind question doesn't make sense or is unanswerable? But what about Einstein and his special theory of relativity, then?

[Over there at Physics SE, the names of Waterston, Clausius, Boltzmann and Clark-Maxwell were mentioned.]

Those who have posted comments on this question have already suggested (and I agree) that the questioner's assumption is unsound where it supposes a "single person" who was the "very first ... to see and understand perfectly clearly that temperature is somehow identical with the mean kinetic energy" of a quantity of atoms or molecules in gaseous form. One of the reasons why this 'single-person' explanatory format is arguably an unrealistic romantic idealization (and has actually been so criticized) is that the history shows a succession of important experimental contributions, on which the eventual mathematization fundamentally depended. It did not emerge from mathematical contemplation alone, and it would have lacked meaningful reference if not for the antecedent studies of the phenomena along with mathematical relations describing them.

p.V = n.R.T , where the successive symbols are for pressure, volume, number of moles or molecules, a constant R, and temperature on an absolute scale T. (e.g. among other sources W J Moore, 'Physical Chemistry', many editions from 1950 onwards with chapters on the kinetic theory and gas laws, giving (latterly well-known) physical/mathematical derivation of the kinetic theory as well as describing its relation with the basic observable phenomena and their laws).

The historical contributors whose results in aggregate enable this summary of gas laws are often given as:-

Robert Boyle (1662), who found the reciprocal relationship between p and V ('Boyle's Law'), for a constant quantity of air at constant temperature -- noting that in Boyle's 1662 account ("A Defense of the Doctrine Touching the Spring and Weight of the Air, Propos'd by Mr. R. Boyle in His New Physico-mechanical Experiments, Against the Objections of Franciscus Linus ...") the author acknowledged a number of precursor experiments by others;

Jacques Charles (1780s), whose unpublished work was acknowledged and re-expressed by Gay-Lussac, showing that for a given quantity of [gas] at constant pressure the volume was proportional (or the density inversely proportional) to the temperature: there had been others including Francis Hauksbee (1708) who had arrived at comparable results;

and Amedeo Avogadro (1811), whose law or hypothesis stated that at a given/constant temperature and pressure, equal volumes of different gases contain an equal number of molecules. (The background of this contribution also included, of course, Dalton's atomic theory or hypothesis (1803-1810).)

One should also not forget the conceptual identification of heat with motion made long ago by Francis Bacon, limited though it was.

This naming of early contributors and their contributions makes no attempt to undermine the importance or results of the later 19th-c. scientists already cited, including e.g. Waterston, Clausius, Boltzmann and Clerk Maxwell. But the inclusion of the earlier history does show more of the perspective and context against which their later contributions fall to be appreciated.

In particular, the contribution of J J Waterston was to add to the gas laws comprising the constituent laws of Boyle, Charles/Gay-Lussac, Dalton and Avogadro, the important explanation of gas-temperature as proportional to molecular kinetic energy expressed as 'vis-viva'. In view of the comments on Waterston already given here and on Physics SE, there may be interest in a link to an appreciation of Waterston and his contribution given by Lord Rayleigh in 1892, in a foreword to a belated posthumous publication of Waterston's original 1845 paper ("On the physics of media that are composed of free and perfectly elastic molecules in a state of motion", J. J. Waterston, Lord Rayleigh, Sec. R. S., Phil Trans Roy Soc A (1892) v.183, pp.1-79 (http://rsta.royalsocietypublishing.org/content/183/1 )). There is no need here to go into Rayleigh's appreciation of where Waterston's contribution advanced and where it stopped, except to mention (a) that Waterston's paper shows signs as might be expected of relying on previous experimental and theoretical work, which he cited as the laws of Mariotte (effectively Boyle's law) and of Dalton and Gay-Lussac (effectively including Charles' law), successfully modeling the effects described by those laws on the hypothesis that temperature is proportional to vis-viva i.e. to the square of molecular velocity, and (b) that one of Waterston's publications (as quoted by Rayleigh) expressed his contribution as a correction to previous work of about 1821 in which heat was supposed to represent motion but the motion was mistakenly measured there as effectively proportional to particle-momentum (i.e. to first instead of second power of velocity).

The problem of appreciating respective contributions made by a succession of experimental and theoretical scientists is a substantial one. It is arguably not fairly addressed by opposing, as the question does, on one side, one who "see[s] and understand[s] perfectly clearly" and expresses that vision as a mathematical equation, against, on the other side, "some rather vague ideas .. over generations of physicists". (This arrangement and expression of the question arguably does suggest an unrealistic and disparaging prejudice against physicists and their contributions).

What is overlooked by the assumption made in the question can be seen as, first, the existence of a long succession of contributing researchers who made partial contributions to what eventually became the kinetic theory and its basis; and second, the crucial role of successive pieces of experimental evidence and of discovery of the phenomena of gases. Also the whole idea of theoretical discovery as something that arises from theoretical or intellectual consideration may be criticised by reference to historical facts, including those cited above, showing how such discoveries with mathematical content can be firmly rooted in experimental evidence.

In principle, it is perhaps conceivable before studying the history that -- as the question assumes -- one of the parties to a discovery indeed had some 'eureka' moment in which a physical perception and its mathematical expression could emerge intellectually in toto. But then again, at the other extreme, it is equally conceivable that a mathematical theory might have done no more than express, as an arguably routine translation into formulaic language, the clear physical insights arrived at by earlier experimental contributors. The likelihood here, especially in view of the cited history, is that neither of these extremes is true of the kinetic theory, and that the respective contributions were partial, successive, occurring occasionally as parallel and independent near-duplicates, and that they depended both on mathematics and on experiments.

To illustrate the intricateness of progress in science, I reproduce here the first paragraph of Clausius' seminal paper The nature of the motion which we call heat and its German original Über die Art der Bewegung, welche wir Wärme nennen: 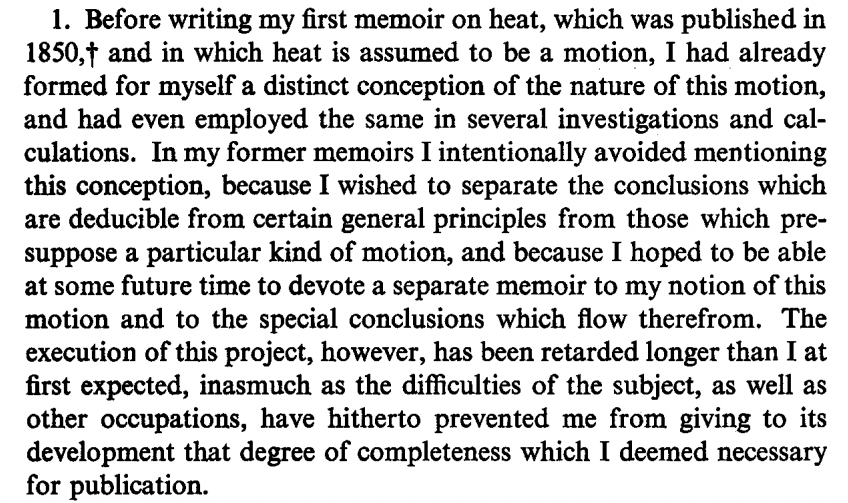 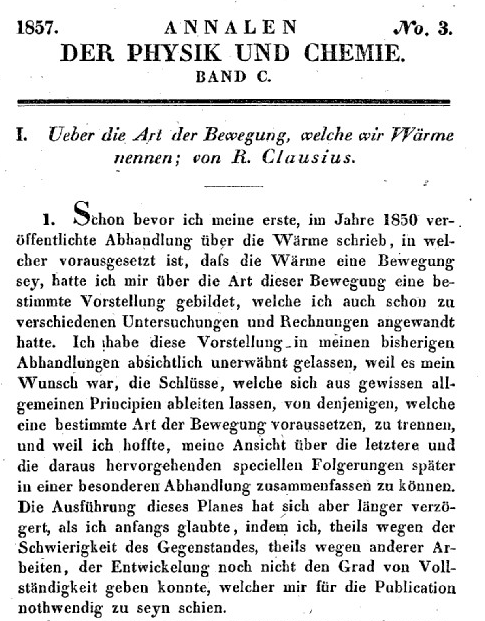 From the title of Clausius' paper, Brush derived the title of his outstanding monograph The kind of motion we call heat (1976).

Not the answer you're looking for? Browse other questions tagged discoveries thermodynamics or ask your own question.

10
Why did 92% of cases of simultaneous discovery in the 17th century end in dispute?
11
Who pitched in the theory of Hollow Earth?
13
What was wrong with the caloric theory?
6
What was the historical importance of the discovery of high-$T_c$ superconductors?
7
Discovery and Development of Coordinate Systems
12
Why didn't Aristarchus' theory of Heliocentrism stick?
3
What was the significance of Eisenstein's discovery of invariants?