Further, I believe that the idea to call it thus had to do with its resemblance to the "torus" in the base of some Greek columns of old: 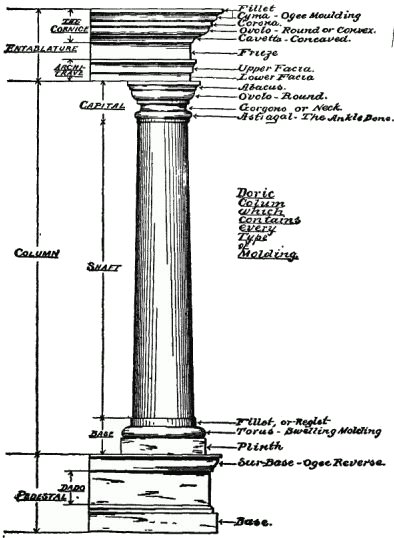 What do you think of this hypothesis of mine?

Thanks in advance for your knowledgeable replies.

Hero mentions the work of Dionysodorus in his "Metrica" this way: "διονυσωδώρω έν τω περί τησ σπείρασ έπιγραφομένω", namely "Dionysodorus in his work On σπείρασ". In modern Greek σπείρασ stays for "spirals", but was used in ancient Greek for the Latin torus. You can find the original text here at page 128, line 3 and 4.

TORUS. Hero mentions a mathematician named Dionysodorus as the author of On the Tore, in which a formula for the volume of the torus is given [DSB].

An early use of torus as a mathematical term in English is in 1860 in The Practical Draughtsman’s Book of Industrial Design by William Johnson: “In geometry, the torus is a solid, generated by a circle, revolving about an axis, continuing constantly in the plane of this axis, in such a manner, that all sections made by planes passing through the axis are equal circles, and all sections by planes perpendicular to the axis will also be circles, but of variable diameters.” [Google print search]

So, do you think the term used for Greek columns was named for the geometric term as in Dionysodorus? Or the other way around?

The mathematical usage comes from the usage in architecture. The word is of latin origin "torus" and not of greek origin, and has a number of different meanings. It means muscle but also pillow (probably circular one) and it means also a strong rope. In this last meaning it was used to describe circular decoration made of strong ropes and afterwards it started being used to describe the part of columns you're referring to. With this meaning it is used already by Vitruvio Pollione (80ac-15 ac).

Nothing strange that the word passed from architecture to geometry, the two subjects being strongly related throught Renaissance and Baroque periods. I easily found Italian citations much pre-dating Cayley:

Francesco Paolo Tucci Elementi di Calcolo Differenziale e Integrale 1850 which is a textbook for students of a Military school (and where you see the expression "superficie torica o toro" together with its equations).

while in V. Gambardella "Istituzioni di Architettura secondo il metodo matematico" - 1798 I've found many reference to the torus surface but no equations. This is just half an hour search on Googlebooks in Italian so I guess many more instances can be found easily.

I guess that the word easily migrated from architecture to Geometry and it will be difficult to trace back a "first usage" of it.

The ancient origin of the word is unclear. It should be related to the suffix Tor-Tur that is connected to the idea of revolving around like in "turning" or in the Italian "tornare" (which means "coming back") and appears in many Indo-European languages, so that it is supposed to be a very old lemma.

ADDED For what concerns "modern" usage it has to be remarked that Kepler in his Nova Stereometria 1615 is credited for having computed the volume of a torus. Since the text is in Latin it is plausible he is using the word torus but it would be nice to check it.

The OED gives an 1870 Cayley citation.

Not the answer you're looking for? Browse other questions tagged terminology topology or ask your own question.

12
Question on “What St. Augustine didn't say about mathematicians”
19
Who first considered the $f$ in $f(x)$ as an object in itself, and who decided to call it a function?
4
What topological ideas did Gauss introduce to his student Möbius?
6
What is the origin of “normal” in normal coordinates and normal modes?
4
Why was the 'differential entropy' from information theory so named?
4
Could a “field” have non-commutative multiplication originally?
5
What is the history on the term 'co-domain'?