Did Gauss's expression for the differential of the hyperbolic volume of the tetrahedron agree with later results?

My question is mainly about getting explanation to Gauss's third note (note III) in his writing "Zur Astralgeometrie", (see Cubierung der Tetraeder, pages 228-229), and about placing it in the right historical context. In this note Gauss is writing the following:

Two things i didn't understand about Gauss's notation immediately came to my mind:

The questions i asked are of great interest to me since I think the problem of determining the volume of the non-euclidean tetrahedron really represents the peak of Gauss's work on hyperbolic geometry, and I really want to get a formal statement of his result, and to understand how is it compared with later results of Lobachevsky and Schlafli.

Update: recently i became aware of a certain interconnection between this fragment (CUBIRUNG DER TETRAEDER) and a second fragment of this kind - "Volumenbestimmungen in der Nichteuklidischen Geometrie" (Gauss's werke, volume 8, p.232-233). This fragment was found among the pages of Gauss's copy of Lobachevsky's 1840 publication (these two fragments are the only ones that deal with the probelm of hyperbolic tetrahedron). As a matter of fact, Stackel mentions, in his commentary of Gauss's "cubirung der tetraeder", that Gauss used the results of the second fragment implicitly when he derived his first displayed formula from p. 228 ($\partial \Delta = -\frac{{1}}{{2}}(24)d(341)$) - he used the two formulas:

to set up this relation ($\partial \Delta = -\frac{{1}}{{2}}(24)d(341)$). The second of these formulas was also mentioned in his later fragment, and though this fragment was written later (Gauss wrote this since the publication of Lobachevsky captured his attention), it seems that he was aware of it earlier.

I made this update because maybe dechipering Gauss's second fragment might serve as a breakthrough in understanding what Gauss knew on hyperbolic tetrahedrons.

(Edited). My German is not too good, but the dot clearly stands for multiplication, and $i=\sqrt{−1}$ so $$\frac{\mathrm{tg}i.24}{i}$$ is what we call the hyperbolic tangent today, $\tanh(24)$. Symbol probably $\partial$ means the differential.

If you can read German, read the comments below the note: Stackel explains what is going on there. In particular he says that Gauss missed the multiple of $1/2$ in his variation formula (his first displayed formula). The formula describes the variation of the volume under the conditions that the following angles 142, 342, 312, 314 are right. Under these conditions he derives Gauss's second displayed formula, (written by Stackel in the bottom line on p. 228), and then differentiates it to obtain Gauss's first formula, with extra factor $1/2$.

Gauss's procedure does imply Bolyai's result on the volume of orthoscheme tetrahedron, as i'll show here. However, Gauss's result is a little bit more limited than Bolyai, since in Gauss's tetrahedron 4 of the 12 face angles of the tetrahedron are right, while Bolyai refers to a slightly more general tetrahedron whose only 3 face angles ar right. 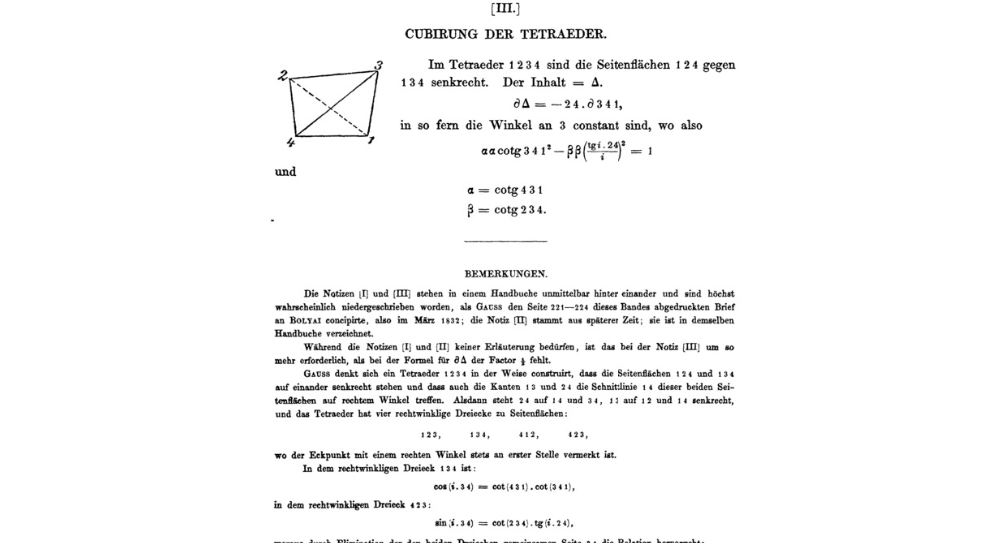 For the sake of consistency, we denote the angles 431, 234, and 214 as $\alpha$, $\beta$ and $\gamma$, respectively. Now lets look at the link of vertex 3 of the tetrahedron: it's a spherical triangle whose two edges lengths are $\alpha$ and $\beta$ and one angle is $\gamma$ (it is the dihedral angle of edge 31 and it's also equal to $\gamma$). In addition the sides $\alpha$$, \beta$ of this spherical triangle are orthogonal to each other. Therefore, by a combination of the spherical sine theorem and the spherical pythagoras theorem, we get:

Now, Gauss's procedure for the calculation of the volume leads to the following integral:

can be seen as treating a slightly more general case then the one treated by Gauss (note: the differences in notation between the Bolyai integral in the presentation and Gauss's integral are just due the different symbols of the angles 431, 234, and 214).

However, for the case treated by Gauss, his formulas are absolutely correct. He should also be given credit for the identification of the calculation of the orthoscheme tetrahedron as the basis for volume formulas of general tetrahedrons (without right angles). In one of his letters, he refered to those calculations of volumes as "die jungle" - i guess he refered to the extremely complicated integrals that arise in the attempts to the decompose the general tetrahedron into orthoscemes (this problem was only solved very recently).

Not the answer you're looking for? Browse other questions tagged biographical-details gauss or ask your own question.

0
How to derive from Gauss's result on the volume of orthoscheme tetrahedron the formulas of Lobachevsky and Bolay?

2
Why did Gauss recommend Janos Bolyai to find the volume of a tetrahedron in hyperbolic geometry?
4
Gauss's anticipation of quaternions and their relation to congruences
2
What is the modern interpretation of Gauss's "Summatorische Function"?
1
Explanation of Gauss's late fragments dealing with "the conformal image of the ellipse"
5
Meaning of a cryptic sentence by Gauss on "the mobility of figures in the hyperbolic plane"