When did the name “Boltzmann constant” prevail, and how?

This question is prompted by (comments at) another one. There, I was surprised to find that despite traditional claims to the contrary, Boltzmann himself did once write his formula $S=k\log W$:

But now: there is another common story, which we get to hear again as 2018 is the year the kelvin should be redefined by freezing $k$. E.g. White and Fischer (2015) (emphasis mine):

This constant is frequently termed Boltzmann’s constant, although to the best of my knowledge Boltzmann himself never introduced it

Not in his autobiography (1948) where $k$ is “the so-called absolute gas constant”. And most remarkably — even if meant with self-deprecating irony — not in his recollections (1943):

I (...) was not even taken seriously, in some places. But I did not let such doubts deter me from trusting my constant $k$.

So: If not in 1900, when did $k$ get its name? Was there ever a debate (e.g. after the unveiling of Boltzmann’s famous tombstone)? Was there a concerted decision? Were the above-quoted pages of Boltzmann’s book ever invoked? Or was it no-one’s doing, just resolution by attrition? Finally, if Planck did not name the constant after Boltzmann, how did we end up with the tale that he did?

By year written, sources where $k$ is named after... 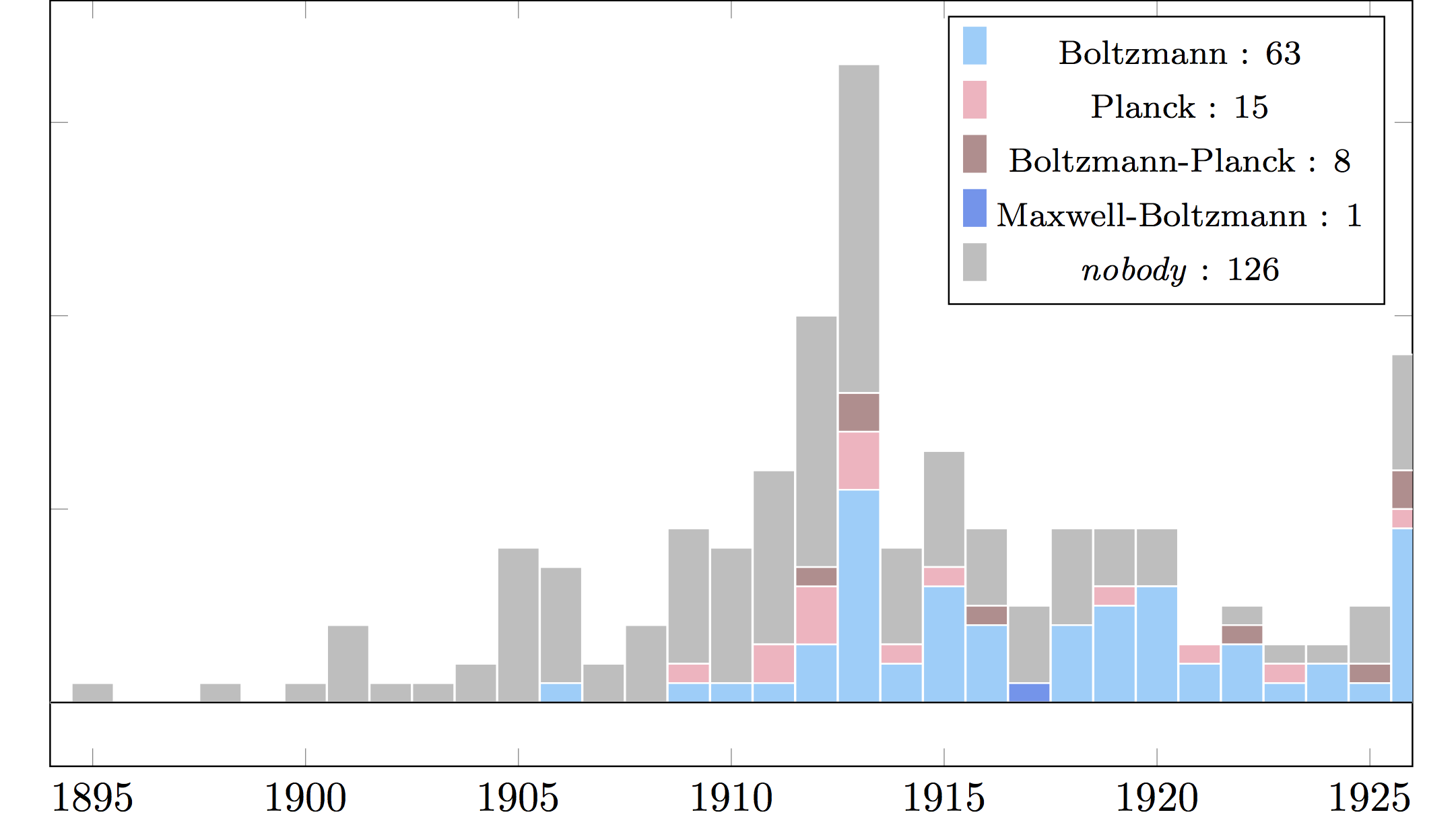 Notes (in progress, very much open to debate / correction):

Q: When did the name “Boltzmann constant” prevail, and how?

In Herzfeld's review article from 1920 for the Encyklopädie der Mathematischen Wissenschaften the symbol $k$ is called Boltzmann's constant without further discussion, so this must have been common usage at that time. This implies that there is no connection with Boltzmann's tombstone, which is from 1933 (as described here).

Tetrode in his 1912 article still refers to Planck's constant (and makes a point that his $\ln$ is Planck's $\log$), so the formula $S=k\log W$ was still a novelty.

I would conclude that the transition from Planck's constant to Boltzmann's constant happened in the 1912-1920 time frame.

Concerning the role of Lorentz in the naming of the constant, I note that in a 1917 paper entitled Some remarks on the theory of monatomic gases, Lorentz refers to $k$ as "Planck's well-known coefficient" (online, page 47). I did not find a later reference from Lorentz, however, in the Ph.D. thesis of his student Van de Sande Bakhuyzen, from 1921, the constant $k$ is called "Boltzmann's constant" (online, page 39).$^*$

So this is consistent with the idea that the name Boltzmann constant emerged within a few years before 1920.

One might ask what prompted the switch from Planck constant to Boltzmann constant. This screen shot from Van de Sande Bakhuyzen's Ph.D. thesis suggests the obvious answer: once quantum mechanics and statistical mechanics came together, a single formula would contain both $h$ and $k$ and different names were needed.

$^*$ I also searched for references to Boltzmann's constant in other Ph.D. theses of Lorentz's students (online here):

So 1920 seems to be the "phase transition" year, at least for Lorentz's students.

After 1920, a vast majority of papers call $k$ Boltzmann’s constant. So (with few exceptions) mention is only made of sources calling it another name, plus some textbooks and reference books.

Not the answer you're looking for? Browse other questions tagged statistical-mechanics or ask your own question.

16
What became of the Boltzmann-Zermelo debate about the second law of thermodynamics?
7
Who named the fugacity, who coined the variable name and did it already relate to complex analysis?
9
Interpretation of $W$ in Boltzmann's entropy formula
4
Did Maxwell discover the distribution of velocities in a gas during an exam set by Stokes?
2
What did people understand heat and temperature to be in Clausius' time?
2
What is the difference between Einstein's and Boltzmann's definitions of probability?