Is there a source collecting data on the numbers of Mathematics professors (I mean with rank of Ordinarius, or ordentlicher Professor) in German Universities around 1890?

To see how clearly both the Ministry of Education and the faculty members distinguished mathematics from other subjets, and indeed different fields of mathematics from one another, see Renate Tobies Zur Berufungspolitik Felix Kleins. - Grundsätzliche Ansichten, in: Natur Technik, Medizin, 24 (1987) 2, S. 43-52.

I recommend the authoritative volume "Das Studium der Mathematik an den deutschen Universitäten seit Anfang des 19. Jahrhunderts" by Wilhelm Lorey, published in 1916. This digitalized edition can be accessed from inside the US.

A relevant source to find answers to this questions is the book (out of print in Germany):

which is the declared source of the data displayed in the following table: 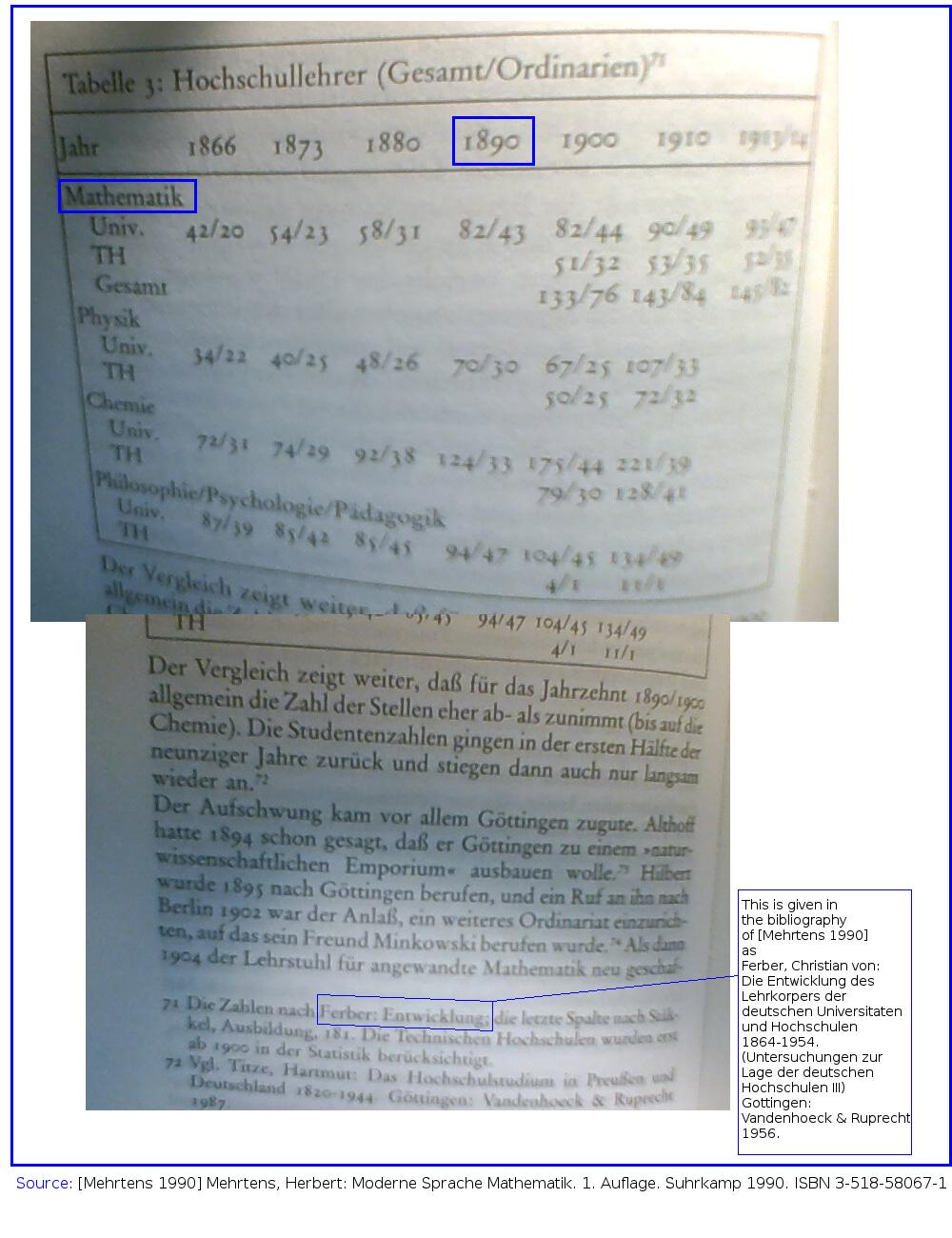 I did not check these data. And yet, I decided to trust these number. Strictly speaking the statements implicit in the above table are not quite defined, as the time-resolution is too coarse. As a programming exercise, I constructed the following histograms, and computed three usual statistics (mean, standard deviation, coefficient of variation), pathetic as that may be given such a small sample size: 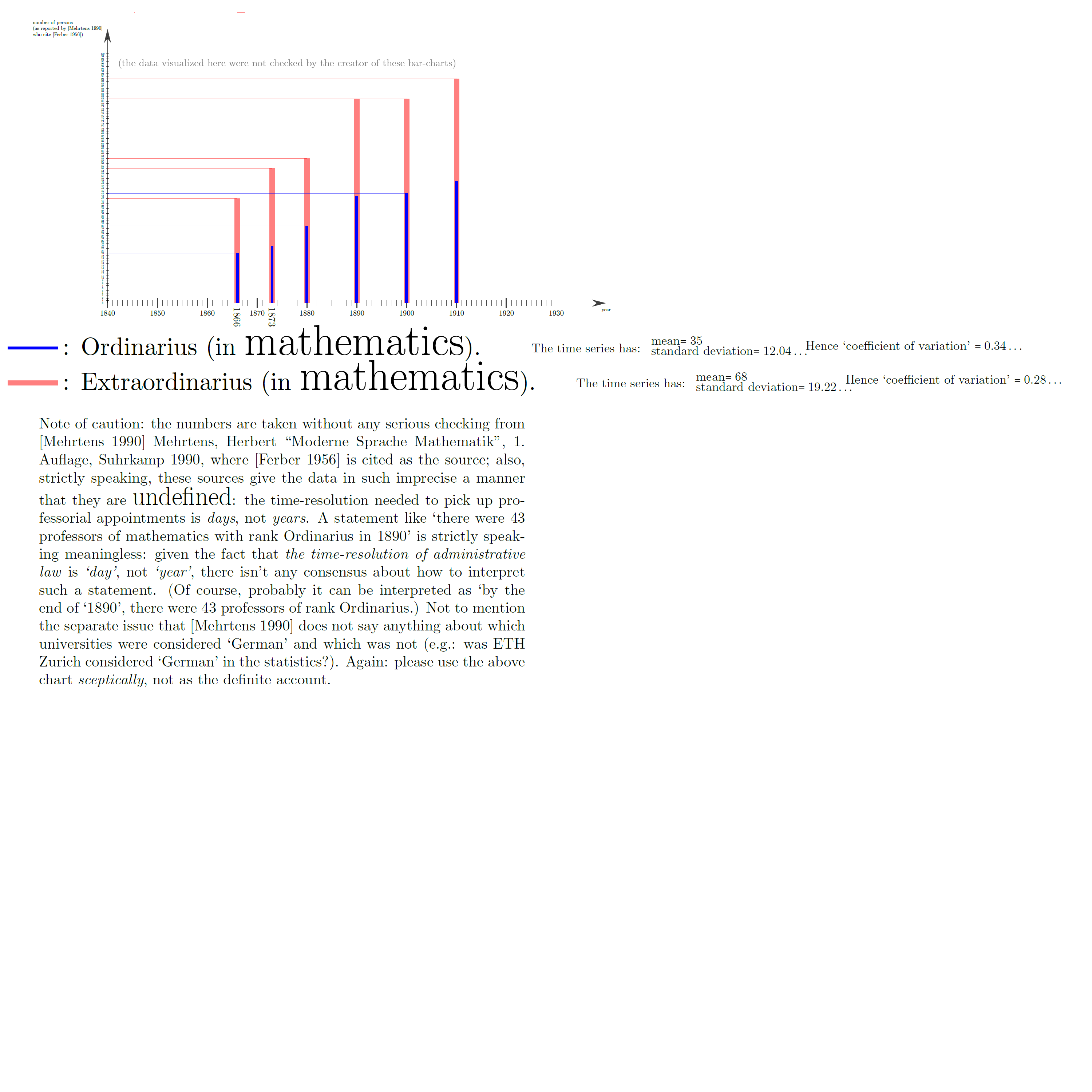 I recognize that the OP is about mathematics only, and yet, while I was at it, I fed the numbers in [Mehrtens 1990, Tabelle 3] about the subjects physics and chemistry into my program as well, obtaining the following charts, which I reproduce here, too, for comparison: 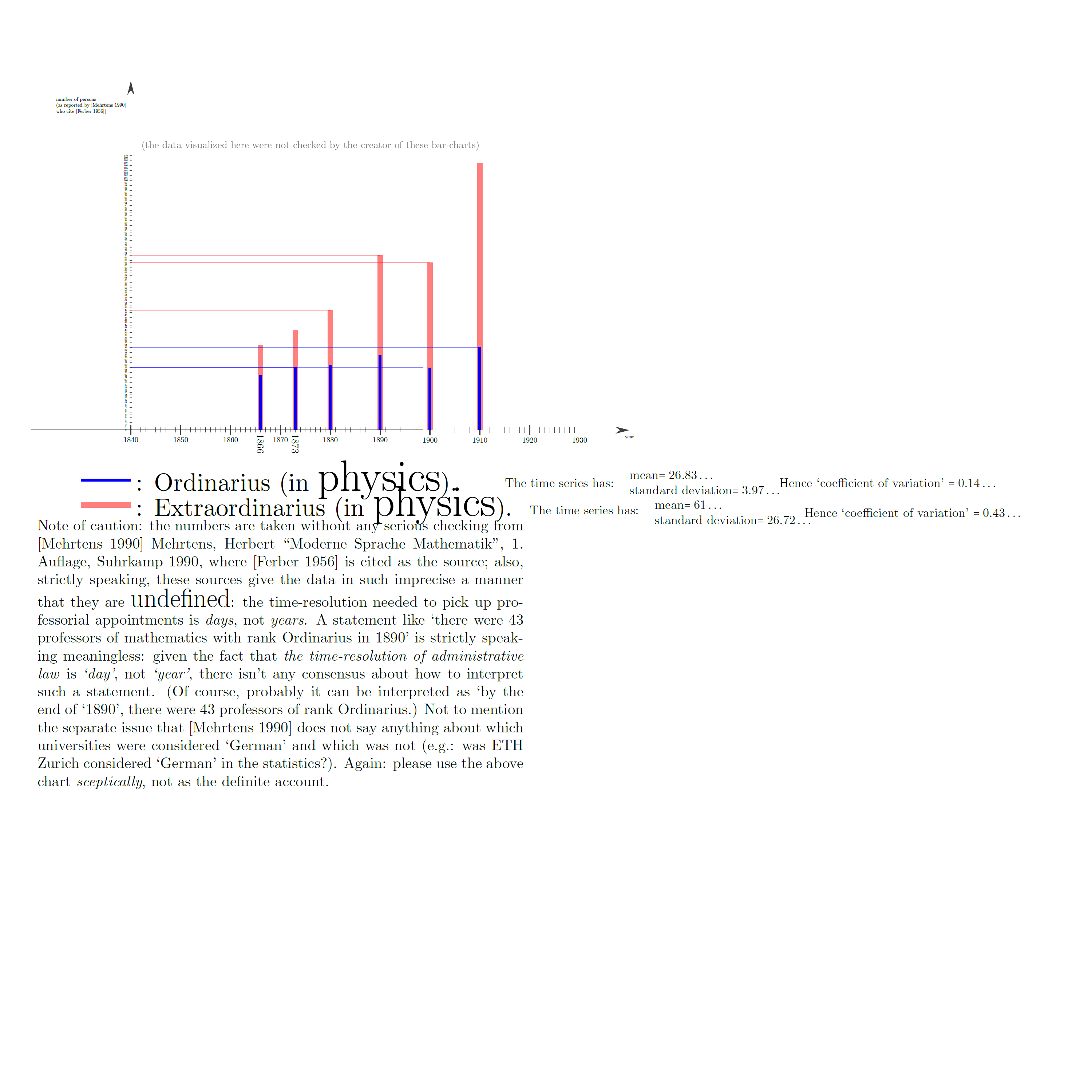 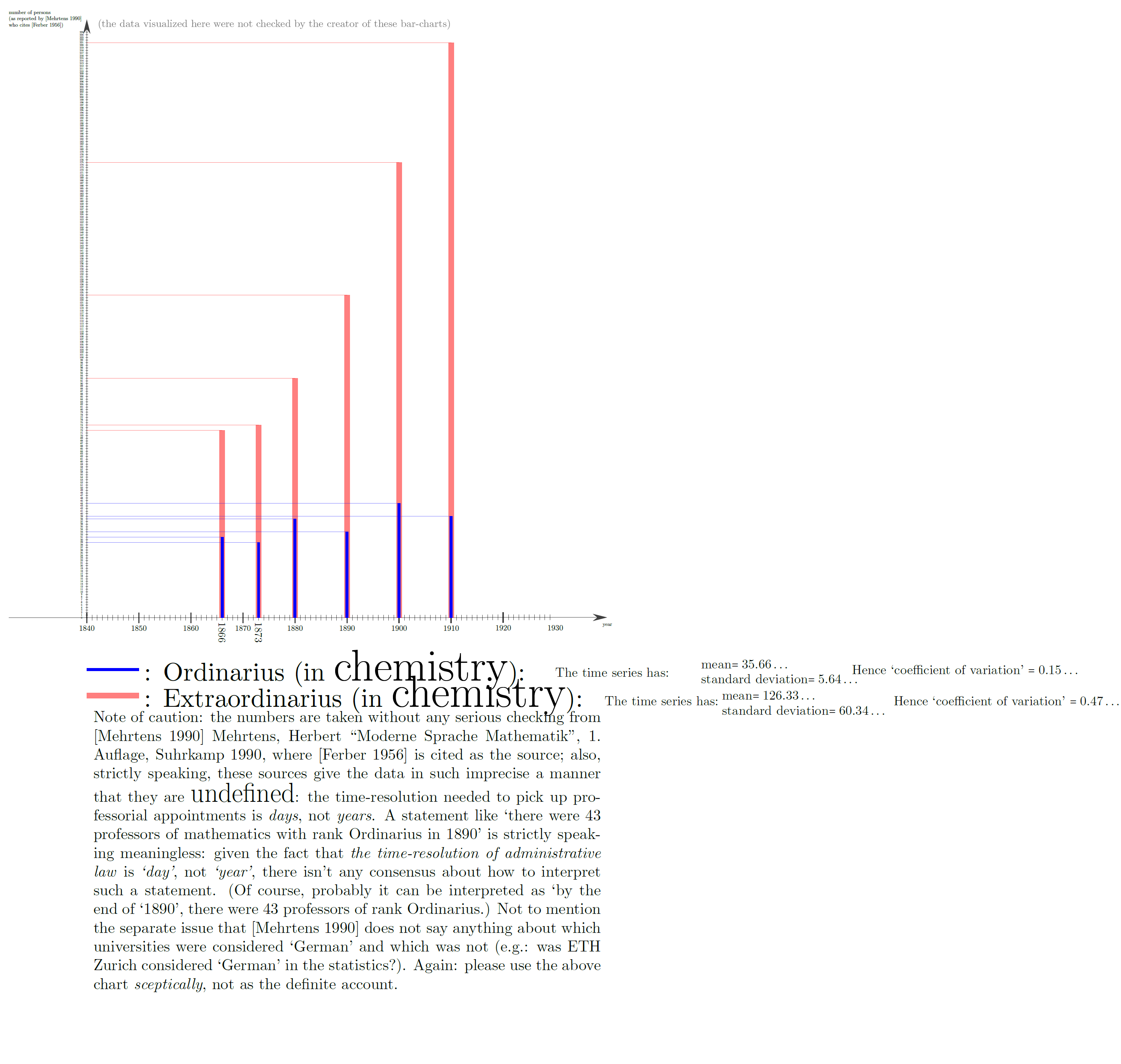 A specialized reference. The following is restricted to one German university only. In the 19th century, there was but one university in Berlin; there was also the Gewerbeinstitut/Gewerbeakademie (which roughly means 'industry/trade institute'), which had a more limited offering of courses, and was Weierstraß's first academic employer).

A standard source-book for the early history of University of Berlin is:

The book is in German, and is out of print, even in Germany.

This book meticulously describes the history of University of Berlin in the interval given in the book's title. In particular, the book has voluminous 'backmatter' with reproductions of original documents (such as proposals to the ministry, or reviews of theses; these are not given in facsimile though), and tables on professors and doctoral students; regarding your question, let me simply describe the 'line of succession' in its entirety, taking the liberty to interpret your 'around 1890' as the interval [1810,1933]. The following is my literal translation from [Biermann 1988, p. 343-348]; I couldn't finish the translation yet. [Biermann 1988, p. 341] says that the source for the following list is

and adds that the data have been 'checked, expanded by numerous additional data, and corrected in some cases'. Biermann says that the basis for these corrections were files in an archive of the 'Philosophische Fakultät' at Berlin, some personnel files, and some university calendars. [Biermann, p. 341] says that the entries are given in 'chronological order, according to the date of the start of the first employment at University Berlin, with ties broken by rank, and ties in both date and rank being broken by alphabetical order of last name'.

3 Eytelwein, Johann Albert. Born 21 December 1764 Frankfurt am Main. Died 18 August 1849 Berlin. Extraordinarius (for mechanics and mathematics) since 1 October 1810. Lectured from Winter 1811/12 till Winter 1814/15. Position terminated: by changing to the position of 'Oberlandesbaudirektor' in Berlin on 4 January 1816.

27 Christoffel, Elwin Bruno. Born 10 November 1829 Monschau/Eifel. Died 15 March 1900 Strasbourg. Privatdozent (for mathematics) at Berlin since 2 August 1859. Lectured at Berlin from Winter 1859/60 till Summer 1862. Position terminated: by becoming professor of mathematics at ETH Zurich on 5 September 1862. [not in Biermann 1988: Christoffel became Ordinarius for mathematics at the (then German) Strasbourg University in 1872]

31 Pochhammer, Leo August. Born 25 August 1841 Stendal/Saxony-Anhalt. Died 24 March 1920 Kiel. Privatdozent (for mathematics) at Berlin since 25 January 1872. Lectured at Berlin from Summer 1872 to Winter 1873/74. Position ended 21 March 1874, by becoming Extraordinarius at University Kiel. Not in [Biermann 1988]: Pochhammer became Ordinarius at Kiel in 1877, and seems to not have retired until well into his 78th year. In particular, Pochhammer was Ordinarius in the requested year 1890.

35 (not applicable: professor of astronomy)

49 Rothe, Rudolf. Born 15 October 1873 Berlin. Died 26 October 1942 Berlin. Lectureship ("Lehrauftrag") for mathematics at Berlin 1 April 1915 as Ordinarius at TH Berlin. [I don't quite understand Biermann's data here; it is unclear whether Biermann means 'lectureship as an Ordinarius', which seems oxymoronic, or whether Biermann means that Rothe had a lectureship at University of Berlin and was Ordinarius at TH Berlin, which seems more plausible] Lectured at Berlin from Summer 1915 till Summer 1919. Position ended 30 September 1919 (no reason given)

52 Carathéodory, Constantin. Born 13 September 1873 Berlin. Died 2 February 1950 Munich. Ordinarius (for mathematics) 1 October 1918, before this: Ordinarius at Göttingen. Predecessor: Frobenius. Lectured at Berlin from Winter 1918/19 till Winter 1919/20. Position ended: 31 December 1919 (by changing to Greece) [ Biermann probably means Carathéodory's change to İzmir/Smyrna to participate in the abortive attempt of founding the Ionian University of Smyrna ]

Remarks on the definedness of the question. While the intuitive meaning is clear, strictly speaking, 'German universities' in the OP is not well-defined (more defined would be 'German speaking', or 'on the territory of the current Federal Republic of Germany', or, but that would be more restrictive, 'Prussian Universities'): in the 19th century, Germany was more united politically/administratively than in former centuries, but still much less united than e.g. in the 20th-century: in particular, Prussia and the kingdom of Saxony had a difficult relationship throughout the 19th century (and went to war against one another as late as 1866 in the 'Battle of Königgrätz' in which Saxony was allied with Austria against Prussia). The kingdom of Bavaria was yet another separate administrative entity. And yet, the Saxon university of Leipzig, and the Bavarian universities of Erlangen and Munich were 'German universities', too, though completely independently administered. To give an anecdote: a letter of Weierstraß, dated 20 December 1885, has survived in which he expresses his outrage at Klein having helped Sophus Lie to a chair at Leipzig (which, Weierstraß implies, should have gone to a German, not to a foreigner, and a young foreigner at that), and then Weierstraß (professor at Berlin) explicitly says that if Leipzig was a Prussian university, he would protest with the ministry (and implies that the Prussian ministry does not have any say in matters of Leipzig University). Such administrative independence is perhaps hard to guess given the proximity of the cities of Leipzig and Berlin. And then there are the issues around University of Strasbourg and University of Königsberg, both of which were German speaking for some time (and the latter having a role in the history of mathematics) but aren't any more.

Professors of mathematics with rank 'Ordinarius' at German-speaking universities in the requested year 1890.

Berlin (Technische Hochschule): du Bois-Reymond: Etatmäßiger Professor (i.e. the analogue of 'Ordinarius' at the 'Hochschulen'; similar to the status of being a 'faculty member' mentioned in the OP) 1884 (cf. page 446 of this source)

Göttingen: Schering: Ordinarius since 1868 (with regard to the OP, Schering is a borderline case, as this source explicitly says he was "ohne spezielle Zuordnung zum Fach Mathematik"; Schering is perhaps most remembered for his work as editor of Gauß's collected works)

Münster: Bachmann: Ordinarius since 1868. (Bachmann is a borderline case with regard to the OP, since Bachmann left the position in the very year 1890. He was Ordinarius at Münster in 1890 though. This is an example of the 'time-resolution'-objection noted in the histograms; very strictly speaking, the case of Bachmann alone is enough reason to consider the table in [Mehrtens 1990] strictly-speaking ill-defined).

Not the answer you're looking for? Browse other questions tagged education 19th-century germany or ask your own question.

22
Why were 20th Century German scientists so impressive?
19
How did Ramanujan learn to do mathematics?
8
Seeking sources: Catholic church and the development of mathematics
1
What were the typical ways students were taught the elements when it remained the prime textbook of mathematics?
1
What was considered Evolutionary Science or Biology proper in 1880-1890 in the US?