There is an interesting cartoon in the book

The cartoon (see below) appears on page 15 and depicts recognizably professorial types exchanging books for cartoonish bags of coins brought by recognizably capitalist types. Hovering over the scene are a sun-like Felix Klein and an angelic-looking Friedrich Althoff, depicted as bestowing blessings upon the congregants. The book says that the cartoon dates from 1908 but does not provide any additional details.

Question 1. Where did the cartoon first appear in 1908?

Question 2. Who created the cartoon?

Question 4. There are several books that have reprinted this cartoon and they all seem to agree that the cartoon originates from 1908. Where did they get this information from?

Question 5. Armin Hermann writes in his 1991 book that the cartoon was distributed with the invitations to a february 1908 meeting at Goettingen, as pointed out in this answer. Where does Hermann's information come from? 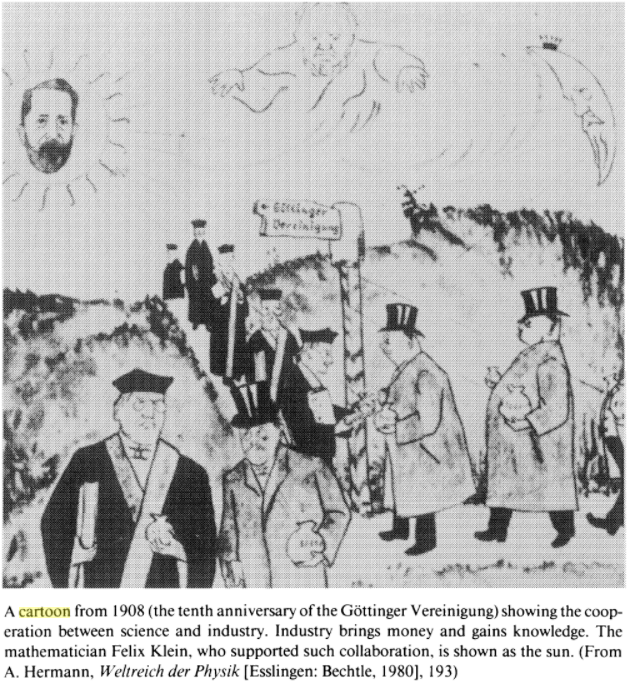 Armin Hermann states in his book on page 355 that this caricature was enclosed in the invitation letters. Since the anniversary meeting was held in February 1908, it appeared before Althoff's death. Here the conference proceedings can be downloaded: https://link.springer.com/book/10.1007/978-3-663-15735-9

Not the answer you're looking for? Browse other questions tagged physics mathematicians or ask your own question.

23
Why did I learn to write the base of the logarithm differently from the rest of the world?

17
Source for Hilbert's famous quote “Mathematics in Göttingen? There really is none anymore”
13
Was Dirac really trying to take the square root of the Klein-Gordon operator?
7
What is the original source for Gelfand's problem on leading digits of the powers of 2?
4
Source of Laurent Schwartz's quote about lobster and math
5
Evaluating the Mehrtens hypothesis concerning Felix Klein
0
Do you know about this anecdote or its source where the mother reads out the letter to Gauss and made him Gauss, the mathematician?
6
Einstein: 'SR is a theory of invariants, not relativity' — source?