What astronomical reason led to the creation of the trigonometric sine and cosine?

Sines and cosines are commonly introduced as ratios of sides of a triangle with its hypotenuse and attributed to ancient Indian scholars. However, I've never actually thought of the reason for introducing sine/cosine to mathematical analysis. What exactly led to the need for sines and cosines? What were the Indian astronomers trying to compute that necessitated the existence of such trigonometric functions?

The closest I've come is this lecture by an Indian professor who explains it as follows: 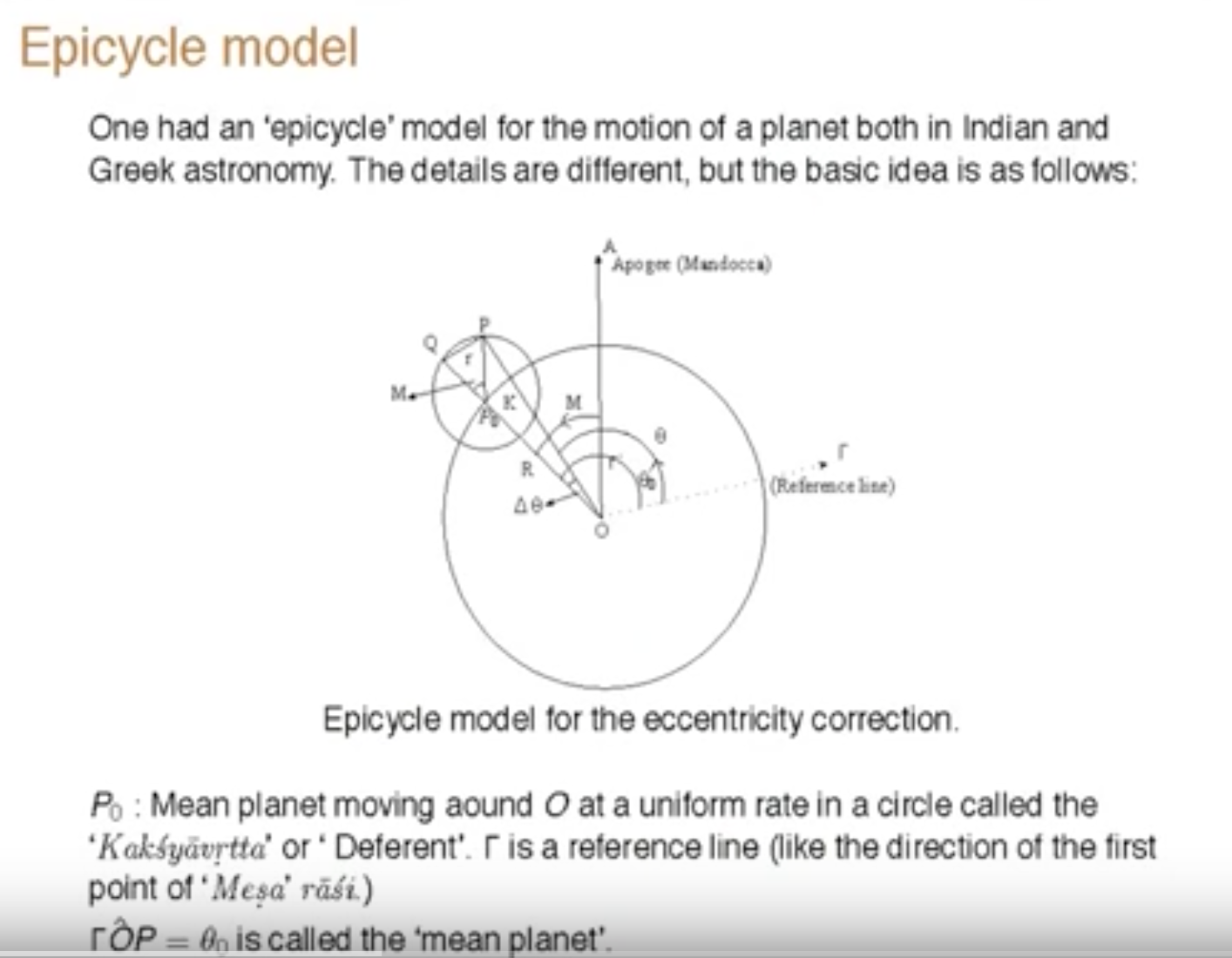 The derivation below has a few odd symbols, not in the diagram above, but it's easy to verify this by hand. The basic premise is that the orbit of planets isn't purely circular and thus a correction needs to be applied to compute its true position. This computation necessitates the need for sines and cosines. 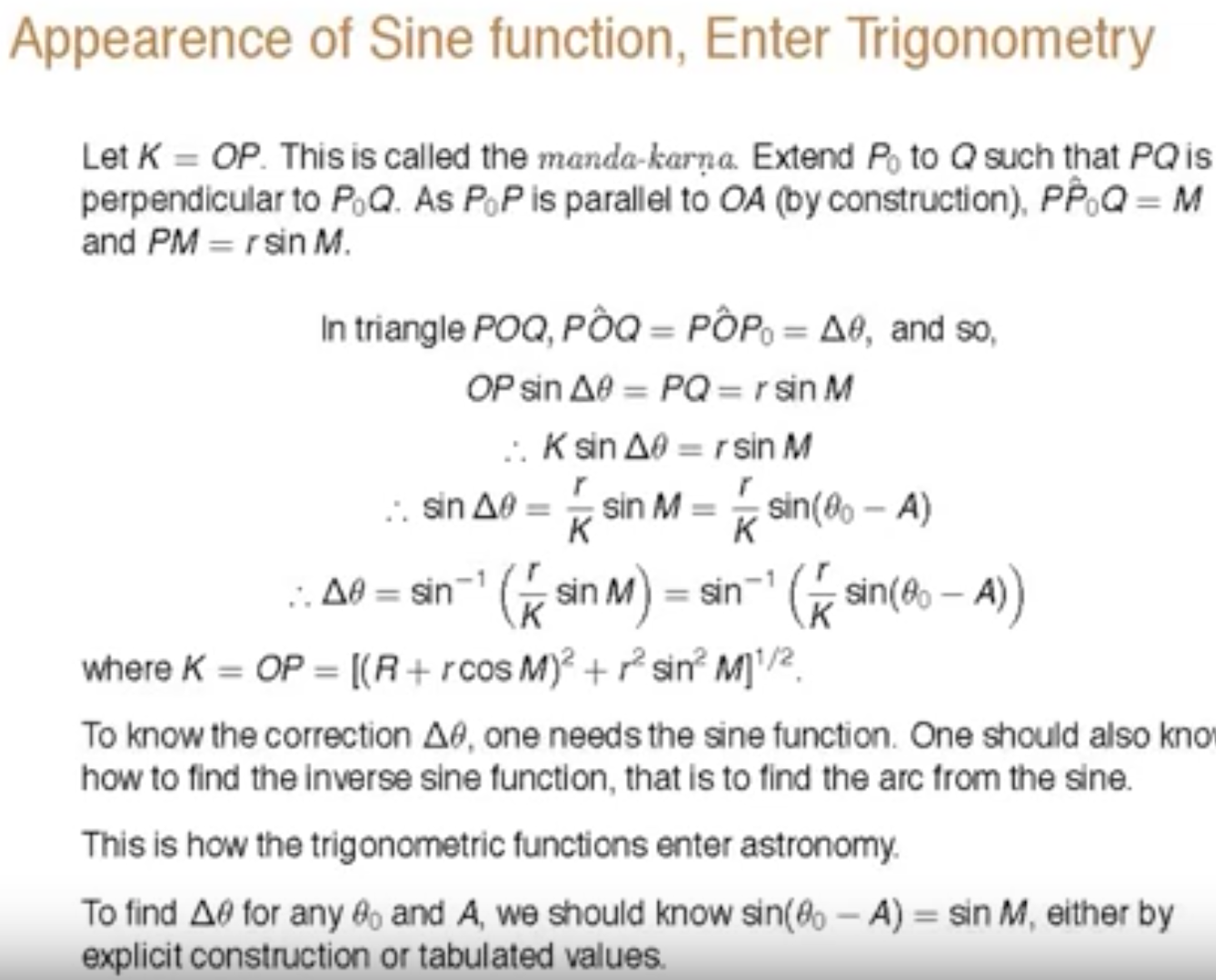 The calculation above depends on the existence of $sin$ and $sin^{-1}$ functions "proving" their need, so to speak.

This was the first time I've come across something like this. Are there any other references anywhere in existing math literature? Is this accurate?

This is a supplement to Alexandre Eremenko's answer. There is useful context to the question and answers in David Eugene Smith's History of Mathematics (originally published 1923-25), especially in volume 2. This contains a topical history of trigonometry (in ch.8, pp.600-632), both in terms of named mathematicians and of particular functions, such as sines and the chords that preceded them.

With reference to the parts of the question that refer to motivations for the development of these topics, it is worth noting that ancient historical evidence often shows what was done or used, but without necessarily giving direct evidence of a motivation for its development. Examples of this can be seen in the cited chapter 8. The motivations that impelled the ancients towards their work and results can sometimes thus be matters of secondary inference, less certain than the historical evidence for the procedures and functions themselves.

On the other hand, the context, e.g. in the Almagest, as already noted by Alexandre Eremenko, can well indicate a likely motivation, e.g. in this case to account mathematically for rising and setting and related phenomena, a set of problems prior to any analysis of planetary orbits. Thus, the opening theorems in Book 1 of the Almagest (see G J Toomer's translation from 1984 and wikipedia), show "that the heavens move like a sphere ... that the earth, too, taken as a whole, is sensibly spherical ... in the middle of the heavens". Then Ptolemy showed that there are two kinds of 'primary motion' in the heavens, the daily motions parallel to the equator and the slower motions in the opposite direction but parallel to a relatively oblique plane. Ptolemy then went on to discuss the "size of chords" along with a table of chords, and spherical trigonometry, as a means to solve problems arising from the spherical phenomena initially introduced.

The simplest type of problems solved in astronomy (ancient and modern) is predicting the time and place of rising and setting of a star. Or duration of the day light for a given date at a given location. This requires a transfer from polar (for stars) or ecliptic (for Sun, Moon and planets) coordinates to the coordinates of the observer.

(In the ancient times ll these coordinates had somewhat different names, and their definition slightly varied, but the essence is the same).

Literature: Ptolemy, Almagest, or any later textbook on Astronomy.

Ptolemy's book begins with trigonometry, then passes to rising and setting phenomena, and only after that describes the motions of the Sun Moon and planets. All later astronomy books followed this pattern.

Not the answer you're looking for? Browse other questions tagged mathematics astronomy geometry or ask your own question.

26
Is there an astronomical reason behind the order for the names of days of the week?
18
Who created topology, and when, and what problems led to this creation?
4
What were the problems that necessitated the introduction of the sine and cosine functions, and how long ago were they introduced?
20
What is the etymology behind sine, cosine, tangent, etc.?
1
Instances of alternative notation being used for the trigonometric functions?
0
When did trigonometry move away from treating chord as primitive?
6
When did the use of Sine and Cosine as functions become mainstream?
3
What does the Fourier transform have to do with heat?
2
What did Fourier mean by stating that every function can be decomposed into sine and cosine functions?