When it was discovered that cubic equations always have roots?

Every cubic equation (with real coefficients) has a real root. Who was the first person who proved this? Is it already contained in Bombelli's Algebra?

There is a problem with how the question is phrased, which is unfortunately common. Modern concepts pull together many different threads which come apart when projected into the past far enough. "Cubic equation" and "real numbers" are two such concepts. When they are used to ask questions about discoveries before 19th, or at least 17th, century there can be no answer.

When people talk about "cubic equations" in ancient Greece they mean geometric problems that can today be converted into cubic equations. And their coefficients would be integers, or at least constructible numbers. Duplication and trisection are such problems, already Menaechmus used intersecting conic sections to solve duplication, we find more examples in Archimedes and Apollonius, Pappus generally describes problems solvable by intersecting conic sections as "solid" (as opposed to straightedge and compass "plane" ones). Netz in his book The Transformation of Mathematics in the Early Mediterranean World: From Problems to Equations tries to trace the morphing of geometry through Diophantus's arithmetic into Islamic algebra of equations, which culminates with Khayyam. Khayyam did look at cubic equations, with positive integer coefficients only, and painstakingly reduced each of the 14 cases, that appear without negative numbers, to intersecting two conics. He also only recognized positive roots, so to him some cubic equations had no roots, some had one or two, and he missed the possibility of three, even all positive.

I am not sure if this answers "“proof” based upon the observation that two certain lines must intersect" version of the question because of the negatives and because I am not sure if Khaayyam's conics are the relevant lines. Even so, Netz's interpolation is controversial. Acerbi in Archimedes and the Angel: Phantom Paths from Problems to Equations charges him with "unfalsifiable conjectures about the aims and intentions of ancient mathematicians, unsatisfactory command and highly tendentious use of primary sources and of secondary literature, unwarranted resort to over-generalization and to modern mathematical concepts, taking conjectures as established facts about ancient mathematics — and treating the received texts and diagrams as if they were what their alleged author wrote in the first place". This should give some idea of the controversies over modernizations.

I'll skip the separate story of Cardano's formula, its inability to produce the root in the so-called irreducible case, and Vieta's trigonometric solution to it (published posthumously in 1615). But it means that Vieta knew how to express roots of a cubic either in radicals or in inverse trigonometric functions in all cases, including negative roots (he did not operate with a notion of function, of course). I have to mention that it was also Vieta who devised a general procedure for converting geometric problems into equations, see Viète's Relevance and his Connection to Euler. Let me now address Dave Renfro's variation on the question:

I do not believe we can entirely avoid getting ensnared in what is meant by a real number, but there is a school of thought (our Mikhail Katz is a member) that we can, informally, trace the notion to Stevin's Arithmetic of 1594, which promoted the arithmetical use of infinite decimals without reservations. This too is controversial, see debates under Who gets credit for the real numbers? But modulo that, Stevin did prove the intermediate value theorem for cubic polynomials, and almost in the way modern textbooks do. Except instead of successive bisection he used successive decisection, subdivision of the interval into 10 parts, which produces an additional decimal digit of the root at each step, see Stevin Numbers and Reality, p.3. Since cubics (and odd-degree polynomials more generally) cross from negative to positive or vice versa this would prove existence of a root by appealing to the observation that two certain lines, the graph and the $x$-axis, must intersect. But even here there is anachronism, Descartes only introduced coordinates in 1637.

According to an excerpt from The Heritage of Thales By W.S. Anglin, J. Lambek, via GoogleBooks, a method was found: 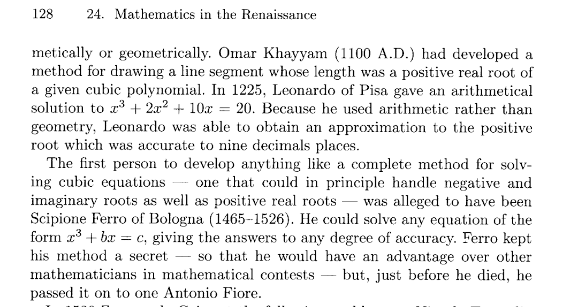 Note that this doesn't indicate a proof that there had to be a real root. The Wikipedia page on cubic equations adds that

Cardano noticed that Tartaglia's method sometimes required him to extract the square root of a negative number. He even included a calculation with these complex numbers in Ars Magna, but he did not really understand it. Rafael Bombelli studied this issue in detail[21] and is therefore often considered as the discoverer of complex numbers.

I don't know when someone demonstrated that complex roots had to come in pairs when all equation coefficients are real; presumably that's what will drive the full answer to the original question.

Not the answer you're looking for? Browse other questions tagged mathematics algebra or ask your own question.

11
Who gets credit for the real numbers?
7
Viète's Relevance and his Connection to Euler

12
What does Lagrange mean in this passage from Reflexions sur la résolution?
1
Who was the first to show that this quintic equation has five radical roots?
8
How was Newton's classification of cubic curves completed?
5
Were ratios of incommensurable magnitudes interpreted as irrational numbers prior to Fibonacci?
4
In history of algebra, who was the first to add one equation to another equation?
3
Was further research done about the invention of Algebra?
5
When were polynomial equations first factored?
1
Newton as the first one to establish numerical analysis as a new field of study
4
What was Gauss's method for solving the "trinomial equation"?