How was the Antikythera Mechanism moved?

I understood all the gears and cogwheels in the Antikythera Machine, but I not sure what make all these stuffs works inside the box.

Nothing is known for sure about the Antikythera (c.100 BC) due to its bad preservation and the lack of accompanying commentary. Perhaps the closest thing whose operation principle we do know is Heron's puppet theater (c. 50 AD) that used a complicated series of gears, rods, drums, and ropes to move small wooden figures. The contraption is powered by a lead weight that falls at a steady pace in a clepsydra (water clock). With the counter-clockwise turns threads are wound around axles and reels, and with the clockwise turns they are released. Heron also describes the famous aeolipile, a bladeless steam turbine that transforms steam power into rotary motion. None of that would work for the Antikythera. Coiled springs and wind-up mechanisms do not appear until 15th century AD.

We do have Plutarch's description of Archimedes's planetarium, often seen as Antikythera's precursor. It was driven through a single rotary motion redistributed to multiple ones at different rates via a device that Archimedes invented:

"Archimedes deserved special admiration because he had thought out a way to represent accurately by a single device for turning the globe those various and divergent movements with their different rates of speed. And when Gallus moved the globe, it was actually true that the moon was always as many revolutions behind the sun on the bronze contrivance as would agree with the number of days it was behind in the sky."

What it is that Archimedes deserves special admiration for we do not actually know, the obvious conjecture is that he used some sort of gear mechanism, but there is no surviving documentary evidence of that. In the Antikythera we do see gears and a differential turntable that would do the trick. In The Antikythera Mechanism: Still a mystery of Greek astronomy? (Astronomy & Geophysics, 41 (2000) no. 6, pp.10-17) Edmunds describes De Solla Price's conjectural reconstruction of how the motion might have been transferred from the driving crank:

"There are 30 known preserved gears in the mechanism. Each gear has been hand cut from a single sheet of bronze. The teeth have all been cut at an angle of 60° and are roughly the same size on all gears. De Solla Price speculates that the mechanism is ‘cranked’ by a now lost handle that turned a contrate (as yet unidentified) gear that in turn rotated a Sun position dial and the main drive wheel. The mechanism then followed three known and one undetermined gear trains. One gear train ended through an inner shaft in the main drive wheel axis and turned a Moon position dial. Another train passes, via the differential turntable (see figure 5), to end up at a synodic month dial and then a lunar year dial. De Solla Price speculates that the third known train drives a four-year dial."

The differential turntable is what, apart from the Mechanism's sheer complexity, sets it apart from all other gearing up to the 16th century. The modern differential is more familiar as the device that allows the inner wheel of a car to travel slower than the outer when turning a corner, but with power maintained to both wheels. The ‘drive’ turns two wheels at different speeds. This process can be reversed so that two ‘drives’ turning at different speeds can then give one output, the sum of the two inputs. The two ‘drives’ in this case come from the Sun and Moon gear trains. One train rotates anticlockwise with the speed of the Moon while the other turns clockwise with the speed of the Sun."

There is no evidence of any spring-driven motion. Antikythera mechanism was not a "clock" but a mechanical "calculator". One probably had to set some wheels on the date and it showed the position of the Sun and Moon on this date.

In general, I don't know of any evidence of metal springs from antiquity. The artillery was driven by elastic things of biological origin like sinew of hair, and at the later stage they experimented with compressed air. But not with metal springs.

Deepening my researches I found a exploded image who shows all of that structure brilliantly described by Conifold. 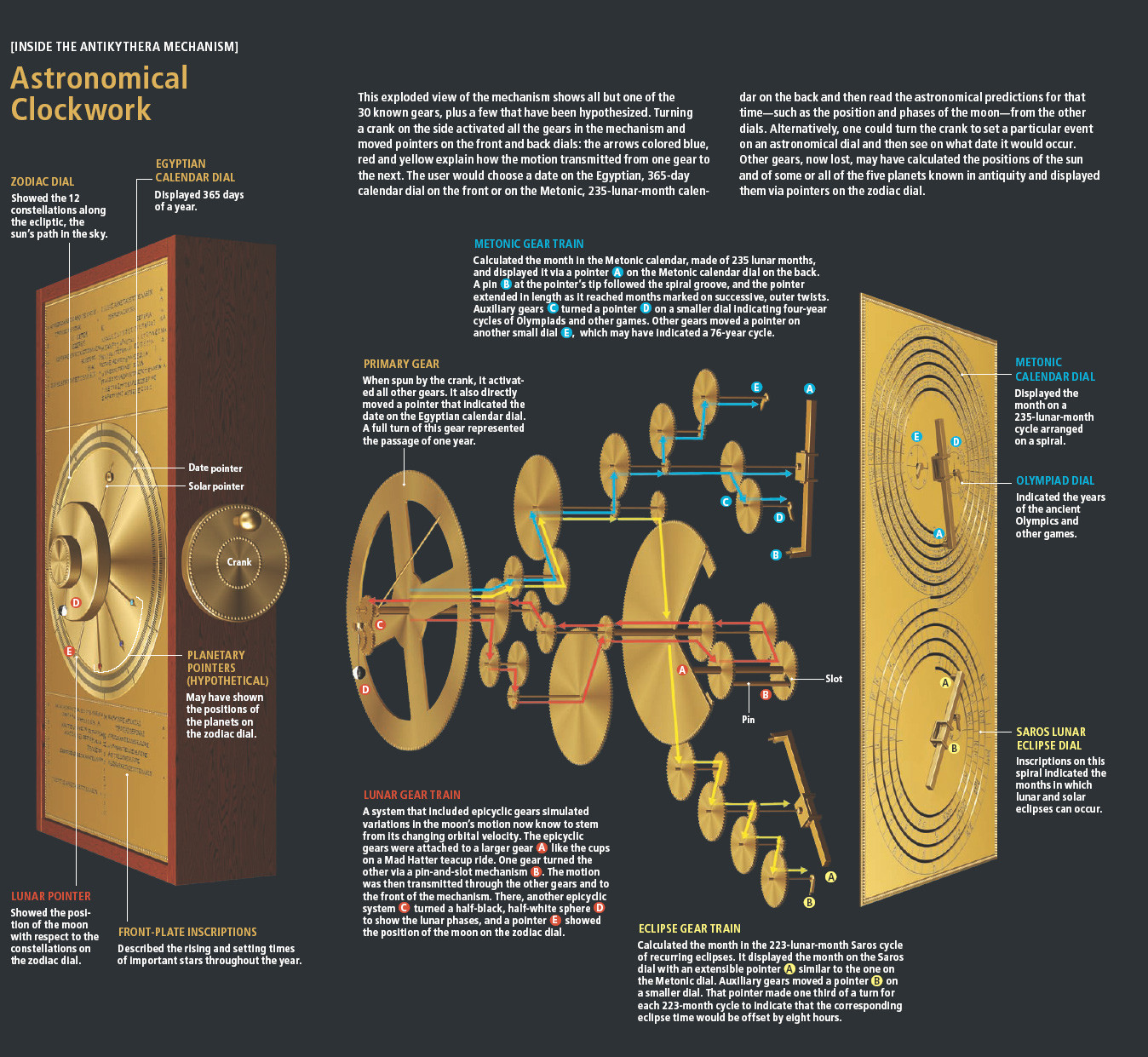 Not the answer you're looking for? Browse other questions tagged ancient-greece or ask your own question.

11
Could the industrial revolution have happened in Hellenistic Alexandria?
17
Did Archimedes use epicycles in his planetarium?
22
Why were geometers dissatisfied with the parallel postulate?
2
What are the earliest mentions of Prime Numbers?
2
Instances of the use and application of mathematics in Ancient Greece
3
Does any extant Greek text prove that the area of an inscribed regular polygon increases with the number of sides?
3
How was gravity explained in Ancient Greek and Roman times?
0
What geometric results were first proven by assuming all real numbers are rational?