What is Newman's "infinite number of curves"?

In John Henry Newman's The Idea of a University (c. 1850), he writes that, in mathematical science, we are told of

...the existence of an infinite number of curves, which are able to divide a space, into which no straight line, though it be length without breadth, can even enter.

He uses this as an example of an idea which, though it might run counter to intuition, need not be immediately rejected. But, in modern terms, what mathematical concept is Newman referring to?

mathematics infinity
Share
Improve this question
asked May 30 '18 at 19:41

As others have pointed it out, it's difficult to know what he meant. Remember that he was reporting on something he had been told which he probably hadn't fully comprehended at the time, or of which he had only an inaccurate recollection at the time of writing.

This answer is the configuration that came to my mind as having some chance of being the one he had had in mind. (If he didn't have it in mind but had only been told of at some point, then I expect the example to be more complicated than mine.)

When Newman writes 'which are able to divide a space', I take it that the space can be the Euclidean plane; he would have written the space if he had meant the three-dimensional space. My guess then is a hyperbolic pencil of circles (the set of blue circles in the drawing is a finite sample of this): 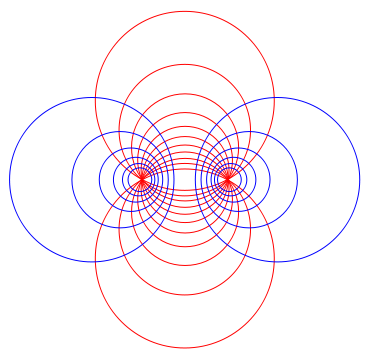 Addendum. A simpler (but equivalent, as we'll see) example is an unbounded set of concentric circles and the concentric annuli defined by them, e.g. with equal spacing: $$\Big\{\{x\in\mathbb{R}^2\,|\, n<|x|<n+1\}\ \Big|\ n\in\mathbb{N}\Big\}.$$ This is projectively isomorphic to my first example because there is a Möbius transformation which maps one configuration to the other. You can map

A family of concentric circles centered at a single focus C forms a special case of a hyperbolic pencil, in which the other focus is the point at infinity of the complex projective line. The corresponding elliptic pencil consists of the family of straight lines through C; these should be interpreted as circles that all pass through the point at infinity. (Pencils of circles, Wikipedia)

Not the answer you're looking for? Browse other questions tagged mathematics infinity or ask your own question.

10
What is the history behind the Erdős number?
6
Earliest depictions of the infinite
5
History of infinite series
6
Did Leibniz use infinite numbers?
8
How was Newton's classification of cubic curves completed?
9
What are the origins of Galileo's paradox?
5
Earliest Instances of a Slope/Direction Field for a First-Order ODE
6
Who developed The Fundamental Theorem of Curves?
3
History of Infinity: How does the idea of infinite set become widely accepted?