Did the pioneers of nuclear physics and radioactivity eventually get sick from their experiments?

We read about nuclear physics and radioactivity in books and we know how to keep safe from their harmful effects, but the physicists who first discovered them didn't have that luxury. Did the pioneers of this type of physics eventually get sick from their experiments? How long did it take for people to realize that the stuff is dangerous?

Marie Curie is probably the most famous example of a person who died of the effects of radiation (handling a lot of radium mostly - for the discovery of which she won the Nobel prize in Chemistry).

In general, people were indeed very ignorant of the effects of radiation. A couple of examples:

A very believable summary of the "history of radiation protection" is given at http://www.physics.isu.edu/radinf/50yrs.htm - this suggests that people were aware of some of the dangers quite early on:

However, other reports, describing skin effects similar to those associated with a bad sunburn, began to appear. So frequent and persistent were these reports that in late 1896, less than a year after Roentgen's announcement, Elihu Thomson, an American physicist, deliberately exposed the little finger of his left hand to an x-ray tube for several days, half an hour per day. The resultant effects - pain, swelling, stiffness, erythema and blistering - were convincing for Thomson and others, but not for all. Many prominent physicians still denied that x-rays were in any way harmful, although oft times the denial was tempered by a qualification that the effects noted were attributable to misuse of the x-ray.

That summary also states that the first "film badge" was reported on as early as 1907 - although its inventor died (from radiation exposure?) six months later. Still, it seems to have taken a long time for the message to really sink in. Once the bombs over Hiroshima and Nagasaki had gone off the world finally had a graphical picture of the "dangers of the atom" and started taking radiation safety seriously. Of course there was a lot of secrecy around it at the same time, as described in Feynman's autobiography (where he is describing the transport of nuclear fuel from Brookhaven to Los Alamos, and the people doing the transporting being told to keep the containers a certain distance apart without being told why. Of course there was the risk of enhanced activity by neutron capture if they got too close, and it's hard not to give away secret knowledge about critical mass when explaining this stuff to the guy loading barrels on the train - so they didn't and nearly had a catastrophe on their hands).

It's hard to quantify the negative effects of radiation. In 1978, a Russian scientist was struck by a particle accelerator beam during routine experimentation. He saw a flash "brighter than a thousand suns". He survived and even finished his PHD, although the beam left a wake of destruction in its path, giving him seizures and partial paralysis. 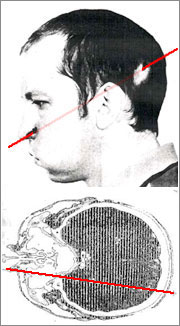 You think consider what type of radiation you're talking about when you contemplate its dangers. Radioactive elements naturally emit alpha radiation, beta radiation (which is just electrons), and gamma radiation (which is just photons). Man-made radiation (such as the kind encountered in a particle accelerator) can be just as harmful, or not harmful at all. It depends on how massive the particles are, and how fast they're moving. In other words, it depends on how much energy is in the particles.

The Demon Core, a subcritical mass of plutonium, went critical during two distinct incidents in 1945 and 1946. Both times, scientists were killed due to exposition to radiation. During the second incident, for example, the two sub-critical masses were separated by a screwdriver held by the operating scientist. On the fatal day, the screwdriver slipped somewhat, and the two parts of the core assembled, reaching the critical mass. A burst of neutrons were emitted while a blue glow of Tcherenkov radiation surrounded the core.

Radiation was known to be dangerous at the time, but security procedures were not always adequate or enforced. Fermi had warned the operating team several times about the risk to see them "dead within a year".

An illustration of the extent to which people carelessly worked with radioactive material in the early years can be found at http://en.wikipedia.org/wiki/Radium_Girls (glow-in-the-dark watches made with radium!). They were not scientists, but I still think it is a good example for this question, since the workers really had no idea that anything could go wrong until it was sadly too late for most of them. The last worker at that factory passed away just a few days ago (http://www.npr.org/2014/12/28/373510029/saved-by-a-bad-taste-the-last-radium-girl-dies-at-107), and she survived so long only because she quit the job after only a couple of days.

Not the answer you're looking for? Browse other questions tagged biographical-details experimental-physics or ask your own question.

3
How much radiation did the Curies get while synthetising Radium?

21
When did it become possible to predict the time and place of solar eclipses?
5
Did Hooke's law come from experiments, or was it mathematically derived from Newtonian mechanics?
9
Does anyone know the physics student who passed a quantum mechanics oral exam without taking quantum mechanics?
10
Did Cauchy forget or lose mathematical papers aside from Abel's and Galois's?
6
Did Gauss see the analogy between number-theoretic concepts and knots?
2
Who is the Westphal behind the Mohr-Westphal specific gravity balance? And how exactly did he improve on Mohr?
5
How did Henry Cavendish deduce the inverse square law in electrostatics from his experiment in 1772?
1
How did Peirce react to his stigmatization from the academia?