Who was this man (who is not Bruno Pontecorvo)?

The English-language Wikipedia article about physicist Bruno Pontecorvo is illustrated with this photo: 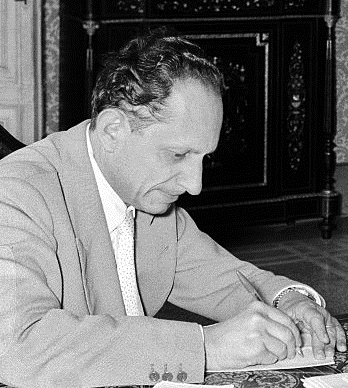 Now, this man seems distinctly different from most portraits of Pontecorvo around: 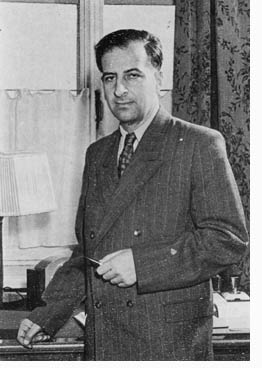 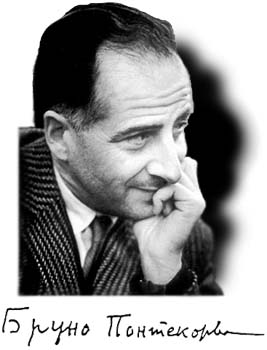 The first two come, respectively, from Italian-language and Russian-language Wikipedias (corresponding to two of his nationalities), the other two from Bruno Pontecorvo Centre of the University of Pisa. But just check most of the photos that can be seen in any book or image search. The hair seems different, and so do the ears, the eyebrows and so on.

Actually this alleged appearance of Pontecorvo seems to derive from a single set of photos depicting this man during a meeting with Enrico (and Laura?) Fermi, from one of which the first photo of this question is cropped. In particular, in one of those photos, the man wears glasses, which doesn't happen in any other portrait of Pontecorvo that I know.

Moreover, in Wikimedia Commons these photos are dated “1950s” (see here one of them, for instance), while in the 1950s Pontecorvo was as far away as possible from Fermi, the former in Soviet Union (out of which he could travel only in 1978) and the latter in the USA (and for half the 1950s Fermi was dead, of course).

So: is that man actually Bruno Pontecorvo and for some reason he doesn't look like his other photos? If not, who is he? And – bonus question – in any case, which was the occasion for that meeting between this man and Fermi?

EDIT: I have found further photos that show Enrico and Laura Fermi in the same outfit as the one in the photos with the mysterious man: 1, 2, 3. As it might have been surmised, they were all taken at the 1954 conference in Villa Monastero, Varenna, Lake Como (Italy), Fermi's last journey in Europe, and one of his last public appearances. So, the other man is definitely not Pontecorvo (who at the time was in the Soviet Union, with a very limited freedom of internal movement, let alone to go abroad). The question now is: who was this man?

45
When exactly (and why) did matrices become a part of the undergraduate curriculum?
10
Cavendish Laboratories Photo, 1939
13
Was Dirac really trying to take the square root of the Klein-Gordon operator?
6
How did Maxwell conclude that light is an electromagnetic wave?
6
Galileo's Discussion of Uniform Motion
18
Is this Einstein rejection letter fake?
0
Do you know about this anecdote or its source where the mother reads out the letter to Gauss and made him Gauss, the mathematician?
3
Why does Riazuddin not have a last name?
7
Why did Galileo express himself in terms of ratios when describing laws of accelerated motion?