Why should February have 28 days?

According to the Gregorian calendar the second month i.e. February have 28 days and in a leap year 29 days.

I am not sure what calculations(science) it takes to decide the total number of days in each month. But my questions are,

The reason is simple. Baiscaly 365 (approximate number of days in a year) is not divisible on 12 (desirable number of months=the number of Zodiac signs).

Then it was proposed to have 6 months of 30 days and 6 of 31, alternating. This still was not good because 6 times 30 + 6 times 31 = 366. So one month has to be 1 day shorter. Why it was decided to make February shorter? I suppose because this was the last month of the year, which started on March 1.

This reform was made at the time of Julius Caesar (it is called Julian calendar for this reason) and naturally one month was named after him. But he was followed by an emperor whose nick name was August, who essentially established some king of monarchy, and it was decided to name a month for him as well (for everyone to know that he was not "smaller" than Julius, but perhaps even greater).

But then it did not look good that his month is shorter than July, so one day was added to August and subtracted of February. And the lengths of the remaining months were changed so they alternate. (Why exactly did they have to name after him the month which follows July, I am not sure: on my opinion, if I were charged with this, I would simply rename September or November in his honor (which are derived from Latin numerals 7 and 9; remember the first month was March!).

Please do not ask me for a reference: I read the story in my childhood, and do not remember the reference. Some Russian book for children, possibly Children's Encyclopedia.

EDIT. The above explanation is a very much simplified version of what actually happened. You can get a good impression of the complexity of the question from the Wikipedia article "Julian calendar", especially the chapters "Sacrobosco's theory on month lengths" and "Names of the months". There are also many references there.

Another interesting article is "Month" in Wikipedia, the part called "Julian and Gregorean calendars". In particular, it gives the following interesting interpretation of month lengths: they correspond to the white and black piano keys! (White correspond to 31 days and F corresponds to Jaunary:-)

There is an article in Wikipedia.

The assertion that August was lengthened by (or in honor of) Augustus comes from Sacrobosco in the 13th century. (Like Alexandre, I learned this in school. But in the US.) But apparently this assertion is no longer thought to be true. For example, there is a painting of a Roman calendar from before the Julian reform showing that February already had 28 days. The Julian reform just kept that. 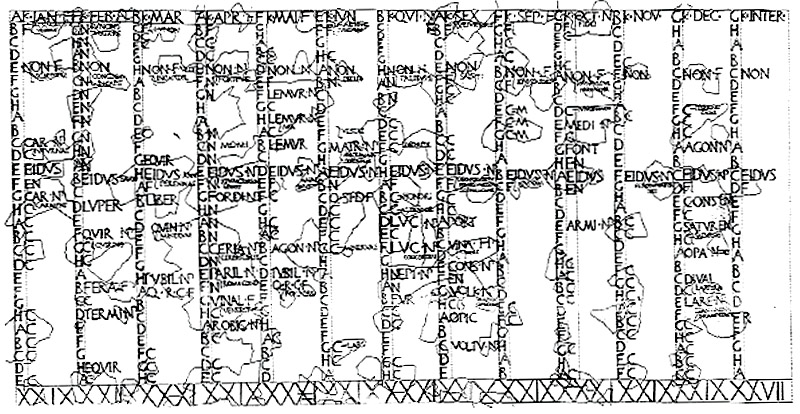 Answer to question:
So, according to this, the length of February was 28 days in the pre-Julian Roman calendar. Any reply attributing it to Augustus is thus wrong.

the 8th century BCE, they used the Calendar of Romulus, a 10-month calendar that kicked the year off in March (with the spring equinox) and ended in December. January and February didn’t even exist:

The Romans believed even numbers were unlucky, so Numa tried to make each month odd. But to reach the quota of 355, one month had to be even. February ended up pulling the short stick, probably because it was simply the last month on the list.

Not the answer you're looking for? Browse other questions tagged astronomy calendar or ask your own question.

23
Is there an astronomical reason behind the order for the names of days of the week?
12
Why didn't Aristarchus' theory of Heliocentrism stick?
14
Why did 18th century writers think that Mars had 2 satellites?
6
Calculation of Gauss leading to 18:7 resonance between orbits of Jupiter and Pallas
4
Why was Charles Hutton's estimate of the density of Mercury so far off?
3
Length of the year in Aztec/Maya calendar
1
Why was 0 0 0 chosen to be the start of the calendar?
2
Why was in 1584 the eclipse of the moon used to calculate the width of the Atlantic ocean rather than just using the Sun itself?
12
Why was China slow to recognise the sphericity of Earth?
0
Who correctly first explained the reason why you can see certain constellations only in certain seasons?