Wiki says 'After his death, his brother Tirunarayanan chronicled Ramanujan's remaining handwritten notes consisting of formulae on singular moduli, hypergeometric series and continued fractions and compiled them' (quoted from Indian express (I would trust not much outside The Hindu but still) and 'When Ramanujan was a year and a half old, his mother gave birth to a son, Sadagopan, who died less than three months later'. On this site 'His mother gave birth to several children after Ramanujan, but none of them survived infancy' is written. As far as I know the local folklore is Ramanujan or his immediate family had no direct descendants.

There were actually two surviving brothers: 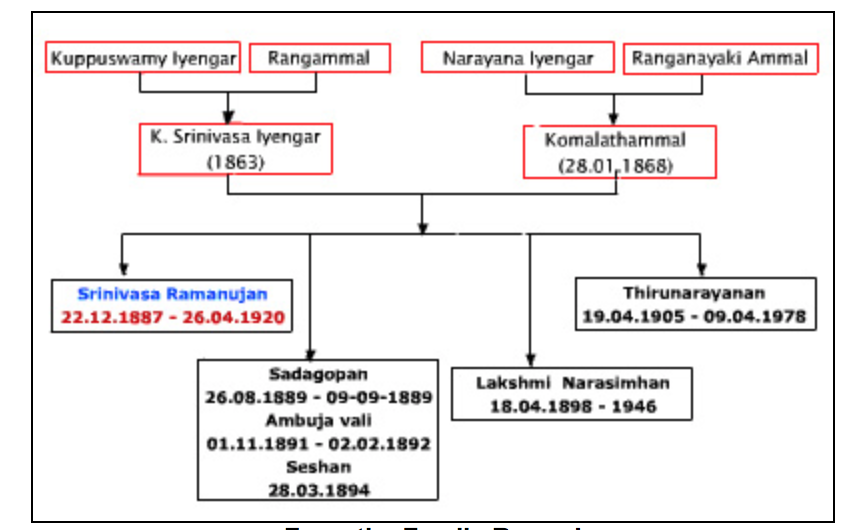 4
Why does the “Principle Of Permanence” have two different definitions?
7
Is there a biography of Ramanujan for mathematicians?
8
Did Gauss say “there have been but three epoch-making mathematicians, Archimedes, Newton and Eisenstein”?
12
What major areas of mathematics have been abandoned?
8
Where did Rayleigh derive the ultraviolet catastrophe?
7
Did Cambridge change their BSc policy for Ramanujan?
3
When/Why did Septagon change to Heptagon?
4
Have orthogonal complex matrices appeared in the literature?