Question about Gauss's contributions to the theory of electric circuits

This question is a continuation of my previously-posted question: Several questions about Gauss's contributions to electromagnetism. I wrote it after user vonbrand asked me to split my original question into several. I'm very interested to learn about Gauss's unpublished fragments on electromagnetism; especially i'm interested in Gauss's "Zur Electrodynamik" (Gauss's werke, volume 5, p. 601 - 630).

The first titles in this manuscript relate directly to electric circuits, and record, to my opinion, his discovery of Kirchoff's laws for branched electrical circuits. But in addition, it seems that he studies some interesting configurations for electrical circuits (see p.601-604 (titles 1-2) and p. 621-622 (titles 16-17)), which i didn't find comments about in the literature. The formulas related to these figures seem to be of a very interesting form (they involve uncommon functions in the basic theory of electric circuits). For these reasons, i refuse to believe that nobody knows what these figures describe, so if anyone knows something about these schematic figures, please explain.

It seems also that title 2 in this manuscript records his discovery of the "principle of minimum heat" (established by Kirchoff in 1848; it's related to minimum entropy principles), which Dunnington mentions in p.161 of his biography of Gauss - Gauss writes: "The basic principle is that $\sum ri^2$ is in minimum for the actual current distribution". Here, $r$ is the resistence of a resistor and $i$ the electric current (for explanation see this article: The Minimum Entropy Production Principle). So, did Gauss refer to this important variational principle in several of his letters (to Weber, perhaps?)?

I'm quite not an electricity engineer, but it seems that the figure on p. 603 (title 2) - which actually represents an interesting electric circuit with a current source "a" (to use Gauss's designation) connected with a configuration of resistors that includes a "Y" shaped collection of 3 resistors (c,e,f in Gauss's notation) positioned in the centre of a circle of three other resistors (b,d,a in Gauss's notation) in a series (i.e, the resistors system is neither serial nor parallel) - is related to the $Y-\Delta$ transform invented in 1899 by Arthur Edwin Kennelly. Gauss gives in this note several formulas which describe the effective resistence of this configuration, as well as the intensity of current in each of the six resistors:

and then notes that the total resistence of the configuration without the piece "a" is: $q/p$.

These formulas seem to be very complicated so one can take it as an indication that he used later techniques from network analysis to derive them. Here is an image of the figure from Gauss's fragment. 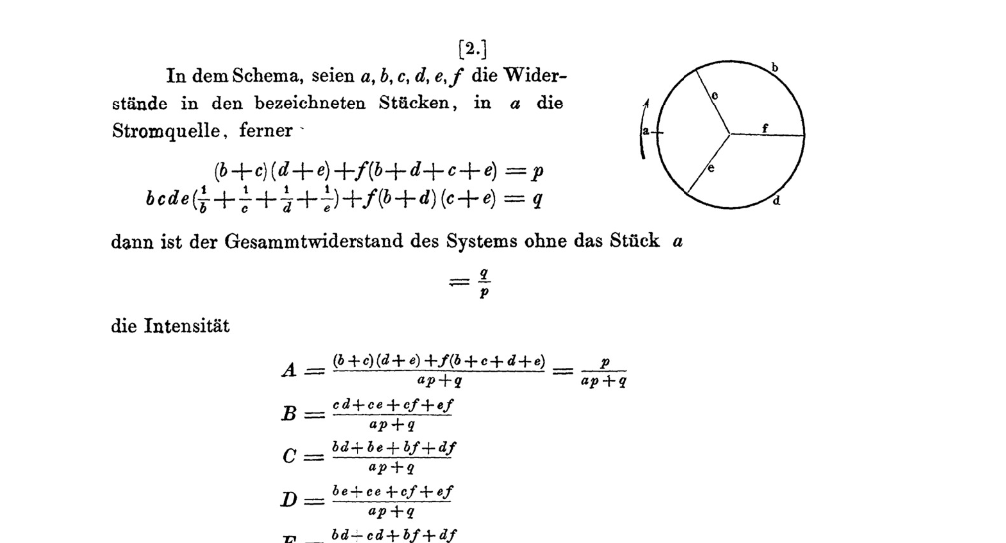 As for the figures on p.621, i think (but i'm not sure) that the problem which Gauss tries to solve in it is (in modern terms): "to find the self-inductance of a single circular loop". This is a very difficult problem in mathematical physics that is often omitted in textbooks on electromagnetism - who usually adhere to the simple problem of calculating the magnetic field and self-inductance of an infinite coil (that is made of an infinite number of nearly circular loops).

What made me make this conclusion is:

The only thing that is lacking for complete agreement is the difference between the numerical factors of the two formulas; a $\pi$ is missing from Gauss's. That might be the outcome of a different system of unit that Gauss used (maybe cgs?), but i'm not sure.

i've added here a figure of p.621 from Gauss's nachlass: 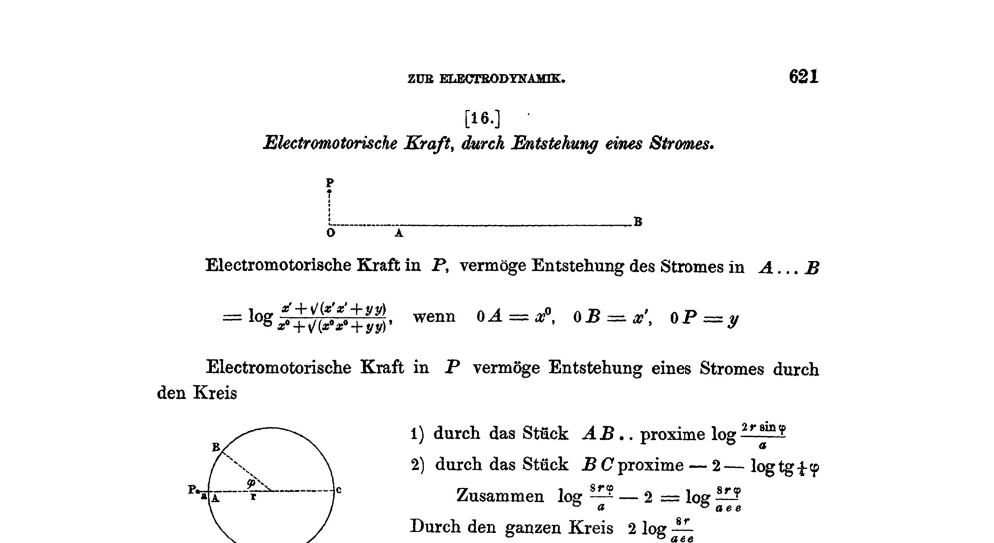 Notice: to prevent misunderstandings, the fact that the self-inductance of a single circular loop can be infinite (in the limit $r>>a$) doesn't contradict the finite result for the self-inductance of an infinite coil ($L = n^2\mu_0\pi r^2 $), because the derivation of magnetic field inside an infinite solenoid is valid onle when the distances between consecutive loops are comparable to the radius of the wire from which the coil is made of. Otherwise the assumption that the magnetic field inside the solenoid is uniform is simply incorrect. In the case where $a$ tends to zero, $n$ (the density of the loops) goes to infinity, so one gets consistent results.

According to this article - https://nvlpubs.nist.gov/nistpubs/bulletin/04/nbsbulletinv4n1p149_A2b.pdf ("on the self-inductance of circles"), the first to publish a formula for the self-inductance of circle is Kirchhoff in 1864; his formula was the first in a series of more accurate results by Maxwell, Max wien and others. So Gauss's (unpublished) formula can be interpreted as a first result in this direction. Gauss's fragment 17 contains several additional formulas, one of which is identical to Kirchhoff's.

Not the answer you're looking for? Browse other questions tagged biographical-details electricity gauss or ask your own question.