When first encountering slope fields in calculus or elementary differential equations, students often ask "What is the purpose?"

A concise answer is that slope fields provide a way to graphically represent a first-order ODE of the form y' = f(x, y). Graphical representations can provide a range of insights regarding the overall behavior of solutions, at a glance. The same cannot often be said about symbolic representations.

This answer would be more compelling if it were possible to point to examples of the use of slope fields throughout history. However, I've had some difficulty charting this history.

The essential idea of a slope field, namely that y' = f(x, y) indicates the slope of the solution passing through any (x, y) that we choose, must have been clear since the beginning of the calculus. Supporting examples can be found in this Twitter exchange.

However, the earliest instance of (or reference to) an actual slope field that I've found so far was around the middle of the 20th century. See, for example, this 1944 note on the Teaching of Differential Equations from the American Mathematical Monthly.

Apart from the Twitter exchange above, I've searched the web, Google Scholar, and my personal library (including many textbooks and a couple of math history books).

What is the earliest instance of a slope field as a graphical representation of the first-order differential equation y' = f(x, y)?

Here I refer not to the underlying idea of a slope field, but rather an actual picture, similar to what is now commonly found in introductory textbooks on elementary differential equations.

I would be happy to see any early examples, not necessarily the very earliest. I would also be happy to see early occurrences of the term "slope field" or "direction field," since these indicate the existence of actual pictures.

Progress! The question isn't settled yet, but I've discovered some new evidence. Starting from references in the paper by Tournès posted by Blåsjö below, I was able to find the following two sources that add to the narrative.

First, consider the book Graphical Methods by Carl Runge (based on lectures given in 1909-1910, published in 1912). Starting on p. 134 (numbered as p. 120 in the physical copy) he discusses the graphical solution of first-order ODEs.

In figure 88, he shows the same method as Bernoulli pictured in Blåsjö's answer, with one addition: he draws a "pencil of rays," which is basically a set of vectors. Since the direction vector indicated by the differential equation is the same for every point on a given isocline, that isocline corresponds to a unique direction vector. The pencil of rays depicts exactly those vectors, and they are labeled to indicate the isoclines to which they correspond.

While Runge evidently has a reason for doing this (he uses the pencil of rays to effect a change of coordinates later on), it's more difficult to quickly sketch multiple solution curves by visual inspection using this graphical representation than it is with a modern slope field, in which the directions are drawn on top of the isoclines or arranged uniformly across a rectangular grid. I did not find any occurrence of a slope field in its modern form, and neither "slope field" nor "direction field" appears in the text.

Second, consider the book Guide to Graphical Computing by Rudolf Mehmke, published five years later in 1917. Mehmke was aware of Runge's book (he cites a 1914 edition on p. 98). He writes the following (translated from German using Google Translate, with a little editing - I do not read or write German).

...differential equations $F(x, y, \frac{dy}{dx}) = 0$ and $\frac{dy}{dx} = f(x, y)$ can be inferred from the geometric sense that they (generally speaking) assign a specific direction to each point of the plane, which must have the tangent of the integral curve going through the point there, or the presented differential equation requires, as one can say, a "directional field".

If the current direction for a sufficient number of points is indicated by short dashes on... a series of isoclines (see Fig. 107), then any number of integral curves can already be drawn in a reasonably correct way according to the eye.

This is the exactly the modern idea (with the aid of computers, we often space these "dashes" uniformly along a rectangular grid, but I suppose that drawing them along isoclines only can also be considered modern). Moreoever, modern terminology is employed (perhaps even coined).

The evidence presented above appears to indicate that the modern conception of a slope field emerged between 1912 and 1917. Of course, there is the (somewhat unlikely) possibility that Runge used the modern form but did not present it in his book on graphical methods. There is also the possibility that Runge didn't use slope fields in their modern form, but others did.

Thanks for everyone's help so far!

Johann Bernoulli explains the idea of a direction field quite explicitly (Modus generalis construendi omnes aequationes differentiales primi gradus, Acta Eruditorum, November 1694). He focusses on drawing isoclines rather than slope segments. There is no figure in that work but Bernoulli drew an example in his correspondence: 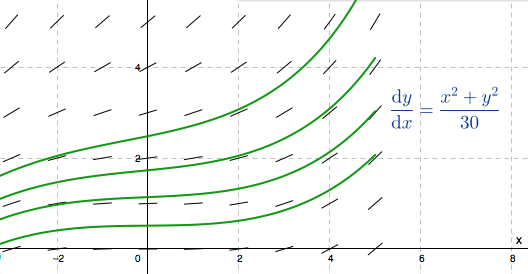 Not the answer you're looking for? Browse other questions tagged mathematics reference-request calculus differential-equations or ask your own question.

4
Invention of the concept of vector field

38
What was Euler's motivation for introducing $i$ for $\sqrt{-1}$?
5
When did physicists start defining waves as 'solutions of a wave equation'?
3
Source of claim that Leibniz discovered separation of variables for ODEs in 1691?