Origin of the Heaviside function?

I have tried to find the actual origin of the Heaviside unit step function and could not. I've searched and searched, read one complete biography of Oliver Heaviside, skimmed another, but nowhere can I find what he was doing, why he developed his step function. Guessing, I would say it had something to do with how a continuous wave signal on a telegraph wire is "digitized" into discrete, binary information as we get from this piecewise function, i.e., how dashes and dots are got from the EM signal on the wire. If anyone has the story behind this function's origin, derivation, application, I would greatly appreciate knowing. It's an excellent example of a continuous phenomenon being transformed into a discrete phenomenon.

"Oliver Heaviside ... what he was doing, why he developed his step function"?

A short answer is that Heaviside was interested, as a practical electrical engineer, in transient effects in complex electrical circuits as well as in steady effects. Examples of 'transient' problems: What happens when a switch is flipped (closed), and the circuit is an intricate combination of inductance, capacitance and resistance, partly in distributed form -- as in a long telephone transmission-line? And then what happens, in a more developed and intricate real situation, when a train of impulsive signals is generated, as when a person speaks into a microphone connected to that kind of circuit?

Step functions and their derivatives, unit impulses, specified with variable delay &c, were among the tools used by Heaviside to study these phenomena in their electrical-engineering environment.

{Edit: } It would be very long on detail to give Heaviside's full motivation for his adoption and use of the step-function in the solution of transient problems such as the 'switch-flip' problem already noted.

But a shorter indication of its logic-flow, as described in H J Josephs' commentary Heaviside's Electric Circuit Theory, may be of interest:

... in concentrated form contains the whole theory of the symbolic solution [of the differential equations] of alternating-current problems. [But classical solution-methods give] only steady-state currents ... and such currents are 'forced' currents. They vary with the time in precisely the same manner as do the electromotive forces. Such currents are, however, only part of the total currents; the complete solution must contain transient as well as steady-states.

If it is found that the steady-state solution of a problem is sufficient, then the need for the use of the Heaviside calculus does not arise. In cases such as this the well-known symbolic method ... is sufficient.

[However, the classical methods usually break down in the attempted solution of the transient problem.]

It was at this point that Heaviside parted with classic analysis and invented his operational calculus ...

In his attack on the general problem Heaviside made use of the principle of superposition. When several electromotive forces are applied simultaneously to a network of fixed parameters, each produces its own effect independently of the others. Thus the effect of each alone may be calculated and the results added to obtain a resultant due to the simultaneous action of the various electromotive forces. This suggested to Heaviside that he could deduce a superposition theorem expressing the independent variables in terms of voltage and admittance functions which have been made to satisfy the necessary terminal conditions of the network.

[In the following description, the step-function mentioned in the question, denoted [ 1 ] below, is defined as identically zero for t<0 and identically 1 for t>=0.] 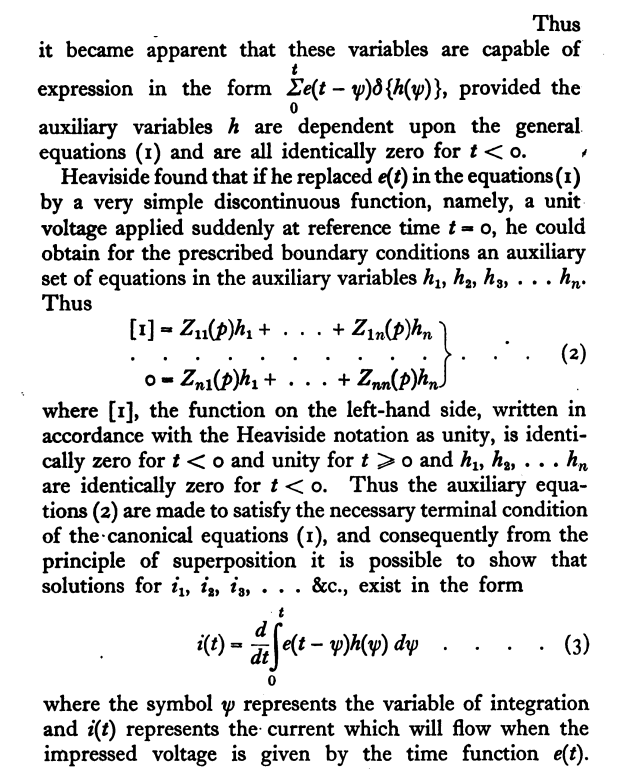 What remained was to determine the 'indicial admittance' functions h(t), which Heaviside did by solving 'operational equations' in which differential and integral operators are replaced by symbols $ p $ and $ p^(-1) $ , then treated as if algebraic.

Further sources showing the relation between these practical situations and Heaviside's developments in mathematics include:

Besides H J Josephs (1946) 'Heaviside's Electric Circuit Theory', there are also useful commentaries and developments of Heaviside's work in works by I A Bromwich and by J R Carson.

Not the answer you're looking for? Browse other questions tagged electromagnetism mathematical-physics heaviside or ask your own question.

9
Why is the Heaviside step function named after Heaviside?

9
Why is the Heaviside step function named after Heaviside?
3
Origin of the term "operator spectrum" and its relation to spectrum in physics
2
Origin of Textbook Argument for Displacement Current as Generalization of Ampere's Law
0
Who introduced the Green function method into quantum mechanics?
8
Origin of operators in quantum mechanics
3
A peculiar quote from Oliver Heaviside
8
Historical origin of magnetic monopoles