How was the notion of the metacenter of a floating body discovered?

Does anybody knows how this important notion of hydrostatics was discovered?

I have read that it is about someone walking up and down the mountains of Latin America trying to disprove Cartesian geometry. But I can't remember where I have read that.

In 1727 the Parisian Royal Academy of Sciences held a prize contest on the optimal placement of masts in a sailing ship. Bouguer and 20-year old Euler, then a student of Johann Bernoulli, submitted solutions. The optimal placement of the sail is directly related to the heel angle of the ship where the heeling moment and the restoring moment are equal. This prompted the investigations of ship's stability that led to the introduction of the metacenter.

Bouguer subsequently participated in an expedition to the Andes in Peru, today Ecuador, for geodesic measurements near the equator from 1735 to 1744, where he worked on his treatise Traité du Navire on ship hydrostatics, published in 1746 after his return to France. However, according to Nowacki, he likely started working on ship's stability already in 1732, when he tested the 18-gun frigate Gazelle in Le Havre. Euler worked on the same subject in St. Petersburg from 1737 to 1741, and summarized it in Scientia Navalis published after a delay in 1749.

Euler gave an equivalent formulation in terms of moments, without introducing the metacenter explicitly. But Euler's book was written in Latin, lacked worked out examples, and remained almost unknown to shipbuilders, while Bouguer's treatise became a blueprint for standard texts.

See Historical Roots of the Theory of Hydrostatic Stability of Ships by Nowicki, where the following diagram from Bouguer's Traité is reproduced. 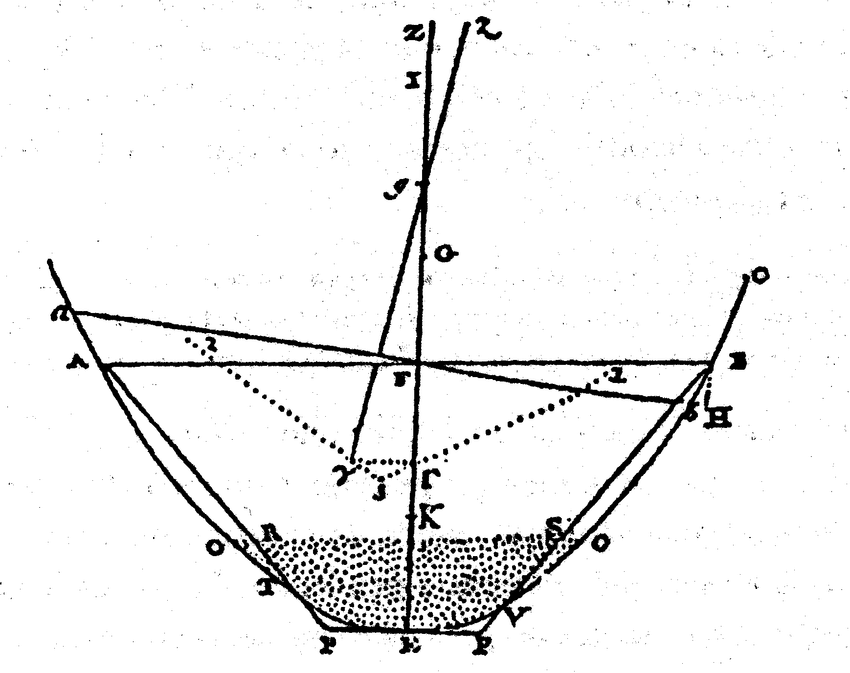 Not the answer you're looking for? Browse other questions tagged mathematics physics or ask your own question.

1
How the law of inertia got discovered?
0
Existence of Pythagoras Resources
5
Looking for references to an experiment on the evaporation rate of water in sunlight
0
When did trigonometry move away from treating chord as primitive?
3
Who made the first derivation of the angle to maximise projectile range, which turned out to be wrong?
5
Did Sophie Germain find a flaw in Euler's equations for elastic vibrations?