What theorem of Sophus Lie on the number of geometries is H. Poincaré referring to? 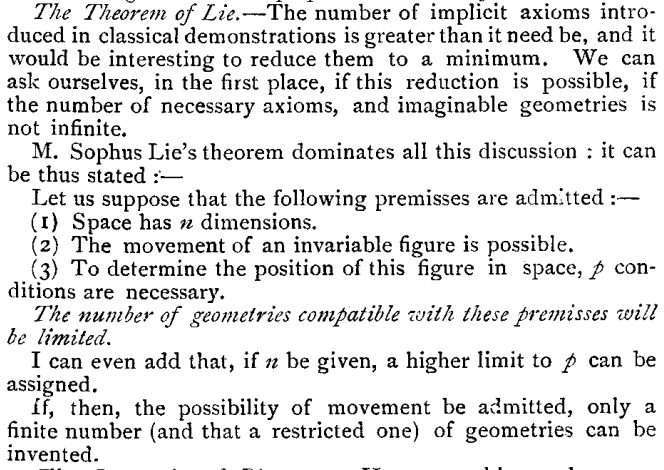 In this quotation from Henri Poincaré's essay "Non-Euclidean Geometry" published in Nature in 1892 (No. 1165, Vol 45, p. 406), he refers to a theorem of Sophus Lie. Does anyone know a source for this theorem, or one that discusses it?

Poincare refers to the Lie's solution of the so-called problem of space, a.k.a. the Helmholtz , or Riemann-Helmholtz, or Helmholtz-Lie problem of space, which amounts to characterizing all manifolds (originally, only 3-dimensional) with free mobility of figures (roughly, homogeneity and isotropy). In modern terms, free mobility amounts to constant Riemannian curvature. This is what Poincare's second quoted condition amounts to, and the space forms are discussed throughout the paper (see MacTutor's English translation). The problem had roots in Helmholtz's objections to Kantian a priori intuition of space being Euclidean. It seemed to be related to the fundamental questions about the nature of space and our perception of it, and preoccupied some eminent geometers (including also Riemann, Clifford, Klein, Engel and Killing, later Hopf) for a good part of 19th and early 20th century.

According to Helmholtz, all a priori intuition of space gives us is free mobility, the rest is to be determined empirically. A good modern exposition is in Weyl's Philosophy of Mathematics and Natural Science, if you read French see also Merker's thesis Sophus Lie, Friedrich Engel and the Riemann-Helmholtz problem. Poincare more or less agreed with Helmholtz's conception, and himself published a mathematical paper on space forms, Sur les hypothèses fondamentales de la géométrie (1887) (the title is borrowed from Riemann's lecture), which uses Lie group theory. Later, in the last of his Analysis Situs papers (fifth complement, 1904), he introduced the "dodecahedron space", a nontrivial 3-dimensional space form, and formulated the now famous Poincare conjecture.

Helmholtz's formulation of free mobility was axiomatic, according to Toretti's Philosophy of Geometry from Riemann to Poincaré, Lie's group-theoretic reformulation was the following:

Toretti gives a detailed account of the pre-history and the Lie's solution (part of which is that there are finitely many such space forms for each $n$):

"The results of Lie’s explorations are contained in the monumental Theory of Transformation Groups, edited with the assistance of Friedrich Engel. Part V of the third volume is devoted to a detailed study of the Helmholtz problem of space. Lie says that this problem was brought to his attention by his friend Klein, who told him that many mathematicians would not accept Helmholtz’s reasoning, and suggested that the problem might be attacked successfully with the resources of Lie’s group theory. Lie reported his results on this matter in 1886, and published them with proofs in 1890. The content of his two papers of 1890 has been inserted in the considerably expanded treatment of Helmholtz’s problem contained in Lie’s big book."

As it turned out, Lie's solution was incomplete because he disregarded global topology, all of his space forms sit in projective spaces. Topological issues came up already in the Klein-Killing correspondence in 1880-s, but the complete solution took a long time to finalize, and is now known as the Hopf-Killing theorem, see Epple's From Quaternions to Cosmology: Spaces of Constant Curvature,ca. 1873–1925. A detailed historical account of Killing's contributions is Wilhelm Killing and the Structure of Lie Algebras by Hawkins.

Not the answer you're looking for? Browse other questions tagged reference-request geometry euclidean-geometry riemannian-geometry projective-geometry or ask your own question.

7
Did Dieudonné say "Euclid must go!" or "Down with Euclid! Death to triangles!"?
5
Primary reference for a formula related to the Faa di Bruno formula
3
Classical source for theorem on three parallel lines cut by two transversals
1
Why is there some doubt whether or not Gauss saw the pseudosphere as the embodiment of hyperbolic geometry?
4
What was the old system of using right circular cones to solve problems about circles in the plane?
5
Meaning of a cryptic sentence by Gauss on "the mobility of figures in the hyperbolic plane"
4
Did Ostrogradsky dismiss Lobachevsky's book on non-Euclidean geometry "because the world is obviously Euclidean"?
3
Where to get more biographical information about Fritz Peter?
1
Does Hadamard claim that Pascal could have discovered non-Euclidean geometry?