How did Cassini measure the "Cassini state" of the Moon? What measurements were made; what did the data look like?

The plain language summary of the paper is as follows:

It is well known that the reason we see only one face of the Moon is because the period of its revolution around Earth is equal to the period of Moon's rotation around itself. Yet the full description of the Moon's rotation is a bit more complex. The Lunar spin axis is inclined by 1.54° in space, and its direction is precessing, like a spinning top, at a period of 18.6 years. This precession is caused by the precession of the plane of the Lunar orbit at the same period, an arrangement known as a Cassini state, named after the seventeenth century Italian astronomer. Like the Earth, the Moon is suspected to have a metallic iron core, its outer region being fluid but the central part being solid. In this work, we calculate the tilt of the spin axis of this solid inner core so that it obeys a Cassini state. We show that this angle can be large, 17° with respect to the mantle for one specific model but that it is also very sensitive to the specific size and mass of the solid and fluid parts of the Lunar core which are not well known.

Further searching leads to Wikipedia's article Cassini's laws, "...a compact description of the motion of the Moon. They were established in 1693 by Giovanni Domenico Cassini, a prominent scientist of his time." 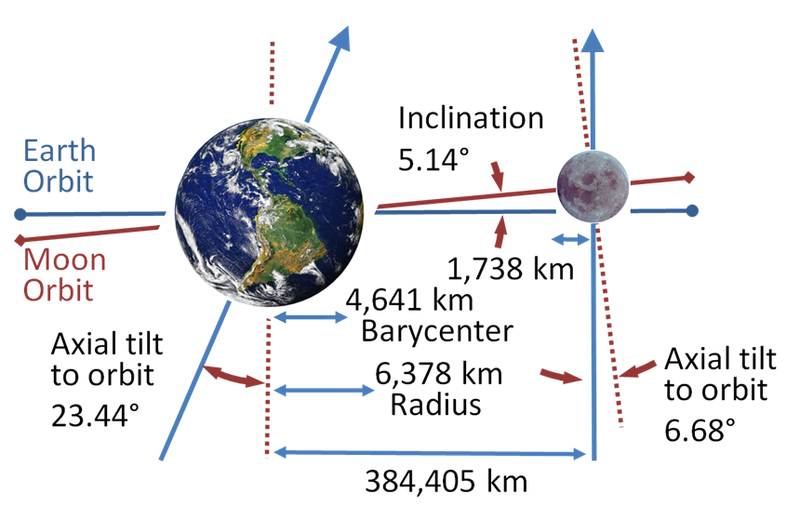 Now that I have found out that the Moon's rotational axis is inclined by about 1.54 degrees with respect to its orbital plane, I can finally understand all of the motion in the Moon's disk during its orbit around the earth as described in the question Who does these mesmerizing simulations of the phases of the Moon? And how? and shown below.

Question: How did Cassini measure the "Cassini state" of the Moon? What did the data look like? Did he make detailed drawings, or measurements of certain features on the moon, perhaps near the terminator or limb?

A sample of the raw data or an image of his notes would also be wonderful to see if something is available.

EDIT: As pointed out here by the GIF's creator, the original image is actually in Wikipedia.

Browse other questions tagged astronomy or ask your own question.

19
What data did Kepler work out his laws from?
20
Who first measured the distance to the Moon? How was it done?
19
How did Kepler "guess" his third law from data?
12
How did ancient Greeks explain moon phases without reflection of sunlight?
25
What attracted Einstein to the anomalous precession of Mercury?
8
How did Kepler infer three-dimensional positions from Tycho Brahe's data?
5
When was the mechanism behind seasons on Earth discovered
2
How did Ptolemy calculate the distance to the Moon?
6
What was the "libration of Pallas" that Gauss studied, when Pallas is not a moon of Jupiter?
2
How did the initial scientists conclude the new moon phase is not an eclipse?