Kenneth Bainbridge was an early pioneer of mass spectroscopy. The Wikipedia article about him says:

with a footnote to this paywalled paper from 1933. (Thanks, Physical Review, for making sure that I can't read a paper from almost a century ago.) The paper does not seem to be available from SciHub. WP also gives a quote from a 1933 book by Aston, which says:

By establishing accurate comparisons of the masses of the light particles concerned in nuclear disintegrations, particularly that of 7Li, discovered by Cockcroft and Walton, he achieved a noteworthy triumph in the experimental proof of the fundamental theory of Einstein of the equivalence of mass and energy.

A 1997 obituary in Physics Today says:

[...] he continued to use his mass spectrographs to measure isotopic masses and to compare nuclear mass differences with the energies measured in transitions as a check on Einstein's mass-energy equivalence.

Can anyone explain what measurement he actually did? 7Li is a stable element. One quote refers to "transitions," the other to "nuclear disintegrations." Would this be a beta decay from 7Be (half-life of 50 days) to 7Li? Or maybe disintegration of 7Li by neutrons or something?

I actually managed to get it from SH 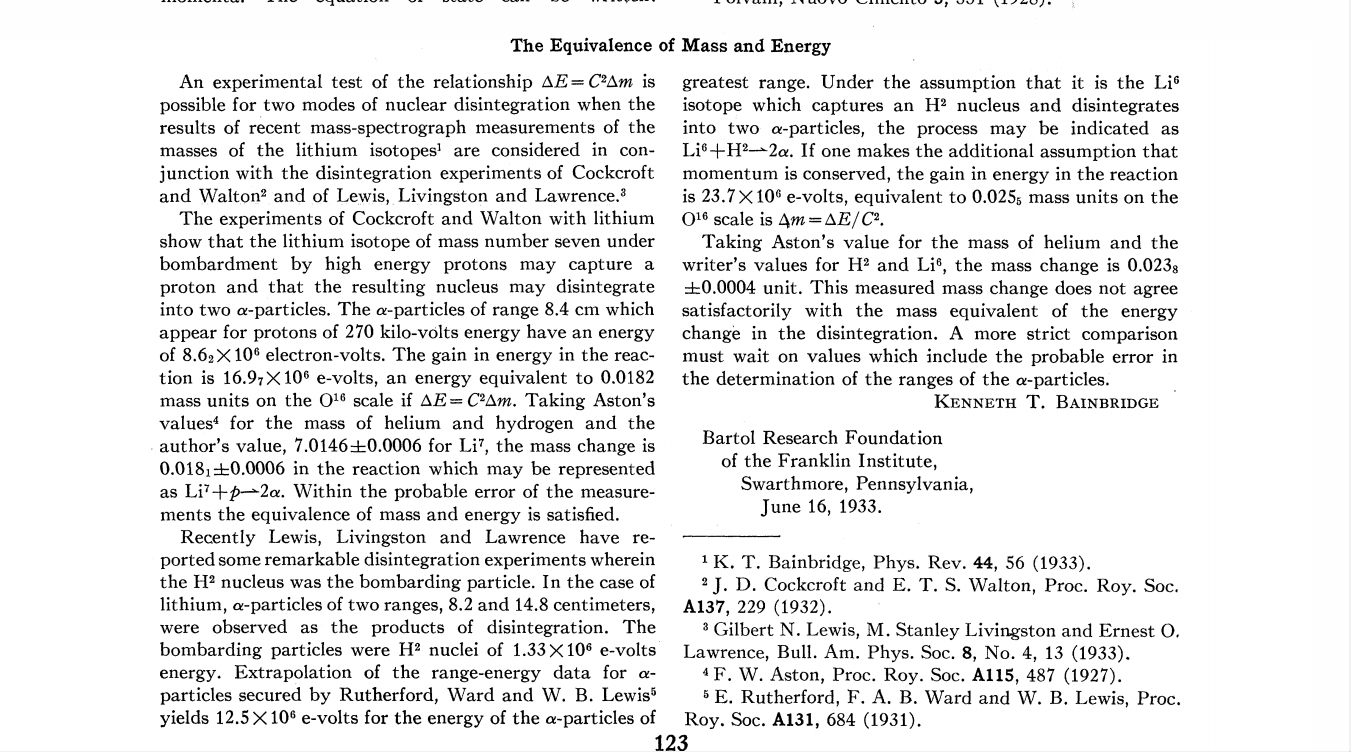 Here is a summary of what I was able to figure out from various sources, including the copy of Bainbridge's paper that a.c. bruno uploaded.

At the Cavendish laboratory, Cockroft and Walton built a kind of electrostatic generator called a Cockroft-Walton generator, which was capable of creating DC voltages of up to 280 kV. They used this to accelerate beams of protons.

They read a paper by Gamow predicting quantum-mechanical tunneling, and realized that their proton beams ought to be able to fuse with lithium and beryllium, even though the energies were below the Coulomb barrier. Natural lithium is 92% 7Li.

In 1932, they observed a reaction which they interpreted as $\text{p}+{}^7\text{Li}\rightarrow2\alpha+17.0\ \text{MeV}$, for the following reasons. They had seen neutrons from their reactions, and had also hoped to see gammas but didn't. But in this experiment, they knew these were alphas because they stopped in air. Because the beam is much lighter than the target, the lab frame approximately coincides with the center of mass frame, in which the two alphas have equal energy due to conservation of energy and momentum. The range of the alphas in air was 8.4 cm, which determined their energies to be 8.6 MeV each, so the energy released in the reaction was roughly double this amount (but not quite the same due to the beam's kinetic energy and maybe also the fact that the c.m. frame doesn't quite coincide with the lab frame?).

This was a big deal because they had discovered induced nuclear disintegration, or "splitting the atom." (Apparently it was not as much of a conceptual exploit to use a proton to knock off a neutron.) They got the Nobel Prize in 1951 for this work.

As a bonus, Bainbridge was able to use this as a test of mass-energy equivalence. The energy of 17.0 MeV was equivalent to 0.0182 amu. Aston and Bainbridge had measured the atomic masses involved using sector mass spectrometers, so they could compute that the change in mass was 0.0181(6) amu. This verified $E=mc^2$.

Not the answer you're looking for? Browse other questions tagged experimental-physics relativity-theory or ask your own question.

6
Who created the energy conditions?
15
What were the early empirical tests of Einstein's mass-energy equivalence $E=mc^2$?
16
When and why did the concept of relativistic mass become outdated?
6
Why is Einstein's mass-energy relation usually written as $E=mc^2$, and not $\Delta E=\Delta m c^2$?
4
History of measuring the mass of the Earth
5
General Relativity, General Covariance and Equivalence Principle
3
Did Galileo state the principle of equivalence in full generality?
3
Why did energy-momentum relationship have to wait until 1928 to be established?