How he get to know which one is positive and which one is negative as stated by him that there are two types of fluid? Also tell how he thought of two fluids?

I may add to the answer above. The electroscope was the main instrument for assessing and checking the electrical sign of charged bodies. Again the reference was amber and glass. Anything electrified like glass, was assigned the same sign as glass i.e. positive and the other one was negative.

It is said he could have chosen violet and red to differentiate charges but he chose the words resinous and vitreous to convey two different "types" of charges. Let us read the original work: http://hipstwiki.wikifoundry.com/page/Charles+d%C3%BA+Fay+%E2%80%93+Explorative+Experiments%3A+Describing+and+Explaining+Electrical+Phenomena 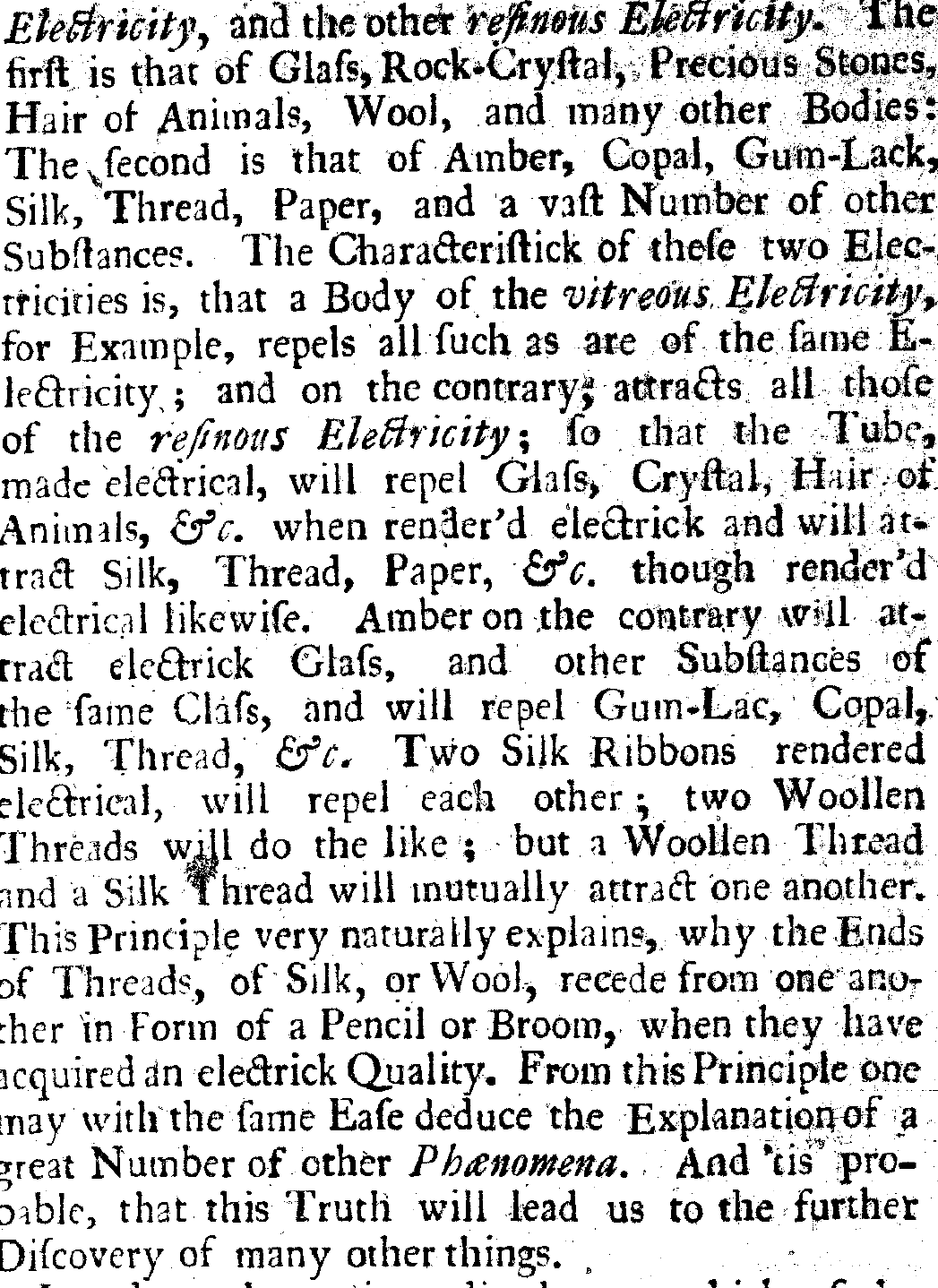 He firstly rubbed a glass rod with silk and moved the glass towards the light objects (paper, foil) - they got attracted. Then he rubbed amber with silk and the same thing happened.
From these phenomena he was clear that if a body is charged then it will attract light objects but not the heavy object (meaning a body heavier than the charged body).

Then he thought: if a heavy body is charged what will happen? So he brought amber near the glass (both charged). As we know amber is little bit heavier than glass. Here he also saw attraction hence he thought if a body is heavy but charged then another charged body can show attraction.

But then he went to prove this using a different material and the next material was two charged glass objects. He brought those close to each other and he found that they repel.
He was astonished as it had been known that electricity phenomena only show attraction not repulsion.

So these experiment with various materials sometimes show attraction and sometimes repulsion. From this he was clear that there are two types of fluid, one vitreous (glass like or positive) and the other resinous (amber like or negative).

He defined positive meaning excess of fluid and negative meaning shortage of fluid. He took as convention that amber is negative and glass is positive.

Not the answer you're looking for? Browse other questions tagged biographical-details or ask your own question.

7
Did Galileo bet money on the ship experiment?
7
Did Galileo perform an experiment at the Leaning Tower of Pisa?
2
What navigation instrument did Leibniz develop?
4
Who influenced Gauss in his abstract approach to mathematics?
4
Meaning of a cryptic sentence by Gauss on “the mobility of figures in the hyperbolic plane”
3
Where to get more biographical information about Fritz Peter?
5
Were Gauss's 1846 remarks on the distinction between right and left related to orientability of surfaces?