What does it mean by "d-ism of Leibniz" and "dotage of Newton" in simple English?

I am reading this article by Donald E. Knuth and get stuck by this sentence:

Our mathematical language continues to improve, just as “the d-ism of Leibniz overtook the dotage of Newton” in past centuries.

I know I can get some hints from the reference 4 but I don't think I can fathom the history clearly. Could anyone please help explain what that means in simple English? Thanks in advance.

mathematicians newton leibniz
Share
Improve this question
asked May 29, 2019 at 14:01

It is a play of words by Charles Babbage. Deism was a religious belief or rather a movement promoting the idea that God exists but it does not interfere with whatever happens in this world. This old philosophy according to the Wikipedia "...asserts God's existence as the cause of all things, and admits its perfection (and usually the existence of natural law and Providence) but rejects divine revelation." Now, Babbage writes d-ism which sounds the same, but now the reference is Leibniz who was one of the founders of calculus (there was a major controversy whether Newton invented calculus or Leibniz). We still use his d's in differential calculus. Newton on the other hand was using dots in his calculations for symbolic purposes. Dotage also means someone who is becoming senile (see comments for other meanings). Basically, the writer is making fun of Newton, who is an Englishman himself, and asking his peers to adopt the symbolism of Leibniz.

P.S. In some European textbooks, one might see dots over a variable to show a differential operator usually with respect to time. No "d" is used then. 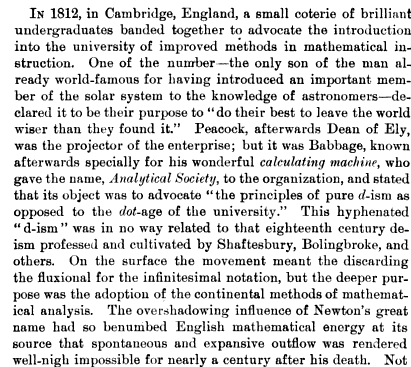 The first answer is excellent but just for context on the actual math:

Newton's notation is fine for very basic single variable derivation and generally the derivative for the described cases but the Leibniz notation is general purpose and demonstrates the process of finding complex derivatives/partial derivatives very clearly. So the newton notation was abandoned (in most cases other than a single variable) in favor of the more consistent and concise notation. Thus our programmer friend Knuth insinuates that we should judge something's value with logical evaluation and not emotional attachment (England's mathematicians went on to use Newton's notation for nationalistic reasons since Newton was an English lad but Leibniz was German/Prussian/Subject of the holy roman empire /Not English so their calculus development stagnated compared to the rest of Europe according to an old math professor of mine, don't know the validity of this statement though).

I think the two other answers here when combined offer a complete explanation of Knuth's word game.

He calls Leibniz notation "d-ism" to combine the English word "deism" with Leibniz's use of the prefix $d$ in $dx$ to suggest an infinitesimal change in $x$. So Leibniz would write $dx/dt$ for the rate of change of $x$ with respect to time $t$. Believing in infinitesimals is akin to believing in a deity - but writing with infinitesimals is good notation because it is extraordinarily productive mathematically - it helps you understand what is really happening and suggests new theorems. Then if you wish you can provide formal proofs that replace the theological infinitesimals with limits. (It is also possible to make the reasoning with infinitesimals rigorous.)

That notation prevailed over Newton's use of $\dot{x}$ for the rate of change of $x$ with respect to time (in part) because it was so suggestive. The pun for Newton is the connection between the dot over the $x$ and "dotage", suggesting senility or old age. Newton's notation (mostly) faded away.

Not the answer you're looking for? Browse other questions tagged mathematicians newton leibniz or ask your own question.

38
What is the difference between Calculus of Newton and that of Leibniz?
15
What kind of mathematical education did Leibniz have?
2
What navigation instrument did Leibniz develop?
1
Newton , Binomial Series and Power Series , and James Gregory
1
Absolute space and time before Newton
13
Was English mathematics behind Europe by many years because of Newton's notation?
3
What mathematics did Isaac Newton learn at school?
1
Question from Whiteside V. 1 - what did Newton mean by a:b :: c:d notation?