Where did the notation for dimensions of a quantity come from?

The current SI Brochure defines the dimension of a certain physical quantity as something separate from its units, and treated in detail in its §2.3.3: 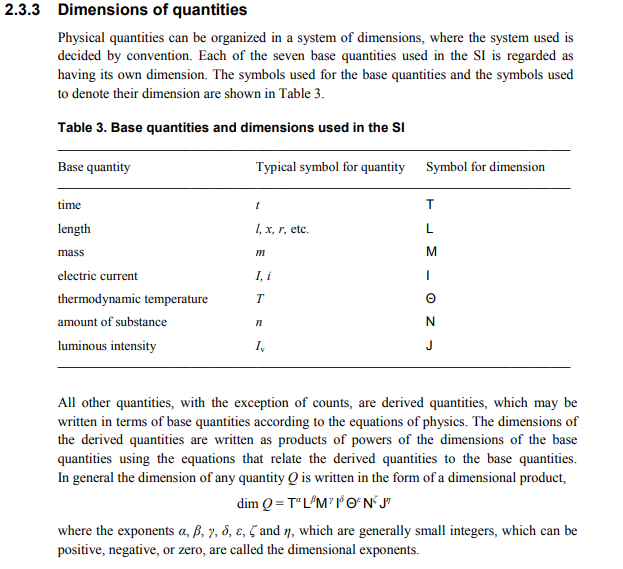 This is, by now, pretty bread-and-butter stuff in the handling of dimensional analysis, and the usage is extremely widespread (cf. e.g. this thread).

However, when looking things up for this question, which asks why the letter $\mathsf J$ was chosen as the dimension symbol for luminous intensity, I was extremely surprised to learn that this usage is extremely recent as far as the SI brochure is concerned: Over its almost fifty-year history, and nine editions, any talk of quantity dimension as something separate from the units is absent, all the way up to the 7th edition (1998), and it is only present in the 8th edition (2006) and the present 9th edition (2019).

Which then leads me to my question: how did this happen? Which is to say, what basis in the literature, both formal (say, CGPM resolutions?) and informal, was used to bring this in? What was the status of this distinction prior to 2006? How well-codified were these conventions at the time, and where were they documented? How and why did they make the leap to the standardized SI Brochure, and where is that process documented?

Browse other questions tagged units or ask your own question.

1
Dimension of the candela unit: What does J stand for?

24
When did the names of scientists first become the names of scientific units?
14
Why is kg the standard unit for mass and not g in SI?
5
On the work of Sadi Carnot
3
when did polynomial coefficient matching start for solving equations?
3
Did English ever use a third (1/60 of a second) for measuring time?
4
Old square bracket notation for units
6
When and how did usage of the term Centigrade give way to Celsius? Are/were they in fact numerically identical?
6
Were the kilogram, the grave, etc. meant to be units of weight, units of mass, or was it ambiguous at the time?