How did people measure electric charge at the time of Coulomb?

Around the time that Coulomb gave Coulomb's law, how did people measure electric charge?

People did not. They generated and stored static electricity, but measuring it, other than by how strong the electic shock felt, was not yet done. Coulomb was the one who invented a way to do it in 1785. For this he used a device called torsion balance. John Michell used it earlier to measure gravity, but Coulomb re-invented the idea, and made it famous. Maglab.org has a picture and a description of how it worked:

To use the torsion balance, Coulomb would hold an object near the metal sphere at the upper end of the metal rod. Any charge held by the object being studied would transfer to the metal sphere, then travel along the rod to the sphere at the other end. There the charge could affect the needle suspended in the case, which in its resting state touched the rod's lower sphere. So any charge in that sphere passed to the needleŌĆÖs sphere. Once the rodŌĆÖs sphere and the needleŌĆÖs sphere both became similarly charged, they repelled one another. The repulsion caused the needle to move and the thread holding it to twist.

The twisting action is called torsion, hence the name of the instrument. To determine how much torsion occurred, Coulomb consulted a small scale marked in degrees near the upper end of the narrow glass tube. A second scale encircling the glass case itself allowed him to determine how far the needle moved. As Coulomb realized, the greater the charge, the greater the torsion and displacement he observed."

An additional question from the comments is how Coulomb established proportionality of the electric force to the charges. One could do it by doubling the charges and measuring what happens to the force, but the answer is... Coulomb did not. Falconer gives a good historical account in Charles Augustin Coulomb and the Fundamental Law of Electrostatics, where she writes:

"The second memoir (1787), on the attraction between dissimilarly charged bodies, shows CoulombŌĆÖs newtonian programme. It is the first to state explicitly that the force was proportional to the product of the ŌĆśelectric massesŌĆÖ of the two bodies, a proposition that Coulomb frequently asserted but never attempted to demonstrate. Nor did he ever define a unit electric charge, relying on relative electric ŌĆśmassesŌĆÖ or ŌĆśdensitiesŌĆÖ. Throughout, his treatment depends on the unstated assumption that electric mass is localized and analogous to gravitational mass..." 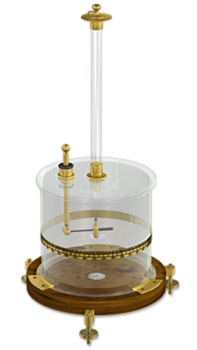 Not the answer you're looking for? Browse other questions tagged physics electromagnetism electricity measurement or ask your own question.

6
Since when do humans know about electric charge?
9
Is Coulomb's law the earliest mathematical formula describing electricity?
4
How did people count seconds before clocks were invented?
4
Origin of the coulomb and ampere
9
How did Henry Cavendish deduce the inverse square law in electrostatics from his experiment in 1772?
4
Names of the electromagnetic units in SI