What is the name of this numeral system?

In a XVth century french manuscript on arithmetic and astrology, there is a description of a numeral system as follows (it starts here in the manuscript).

Numbers between 1 and 9 are depicted by a vertical bar and a set of small bars on the upper-right (the conversion to arabic numerals is obviously using a slightly earlier version than current-day digits, but this is nothing difficult and not the topic of the question):

Then larger numbers are represented with more bars, for instance with:

one can then write:

Finally, very large numbers can be written by embedding symbols: 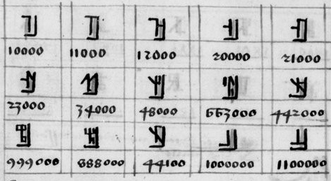 I would like to know the name (if any) of this numeral system, who first came up with it (if this is known), and relevant references about it.

According to S.Lamassé in Scientific Sources and Teaching Contexts Throughout History: Problems and Perspectives (page 130, footnote 28. A.Bernard & C.Proust, Eds. Springer, 2014.), this a system that is close to the Algorismus Linealis.

Now, a copy of this short incunable is available online, but I must say I do not find the comparison too enlightening. Lamassé seems to wish to regroup them under the idea of "a table with counters", but the differences are quite stark to me. Yet, since there doesn't seem to be a better answer in the literature, I'll leave it at that.

Not the answer you're looking for? Browse other questions tagged mathematics terminology notation number-theory or ask your own question.

7
Historical roots of the justification for the rule for multiplication of negative numbers
6
What is the most ancient civilization that used base-16 (hexadecimal) number system?
8
Did the ancient Greeks have zero in their number system?
3
Was further research done about the invention of Algebra?
2
What is the origin of Arabic numerals
7
Were ancient Romans so bad at computations before Arab numerals?